← Crimson Dawn
Master of the World →

And the Last Trump Shall Sound 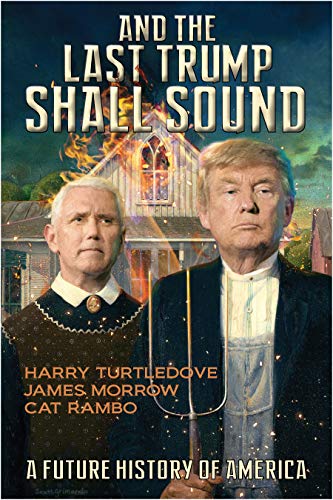 In the not-too-distant future, Mike Pence has ascended the ladder to the presidency, but the foundation that was laid during Donald Trump’s time in office still stands strong. The United States has become little more than a caricature of its former self as its people grow more and more extreme about almost literally every issue imaginable. Finally reaching a breaking point, the west coast declares its independence and comes Pacifica, prompting the northeast to consider following suit. As both nations adjust to the change, the stories that emerge range from terrifyingly feasible to laugh out loud absurd, with just a little of the bizarre thrown in for color.

And the Last Trump Shall Sound is a trilogy of novellas that explore a different aspect of the future of Trump’s America in the wake of Pacifica’s succession. Each entry is penned by a different author and as such, projects a drastically different voice. Although each story is connected and follows a linear timeline, using different authors helps to keep it fresh.

“The Breaking of Nations” by Harry Turtledove illustrates the first days of Pacifica and the struggles faced by its leaders. Of the three, this one is easily the most frightening for its plausibility and passages that read more like non-fiction at times. Turtledove paints the picture of a future devoid of any semblance of morality or democracy and the people who want desperately to salvage what they can.

In contrast, “The Purloined Republic”, by James Morrow takes a more absurd approach to solidifying Pacifica’s status as an independent nation, a couple of years down the road. Taking a page out of classic spy and espionage novels, Morrow’s tone is much more tongue in cheek as our heroine Polly agrees to go undercover in the hopes of undermining Pence’s legitimacy, even among the most devoted Americans. What follows is a series of events that can only be described as both ridiculous and wildly entertaining.

The final entry is “Because it is Bitter” by Cat Rambo, and this one gets weird. Set six years after the formation of Pacifica, it veers firmly into science fiction territory, and stops just short of portraying life in America as dystopian. It combines the implications of Trump’s future with a complete lack of privacy that raises plenty of questions about freedom and manipulation. It provides a fitting end to the trilogy as it leaves the door open for both hope and uncertainty.

For me, the opening story was the weakest of the three and made getting into the book a little slow, but it was nonetheless well written and a necessary read for the other two to make sense. I thoroughly enjoyed the differences in style and tone, and would love to read more from these writers in the future.

← Crimson Dawn
Master of the World →