← Bullying: What are we really scared of?
Living with Internal Conflict → 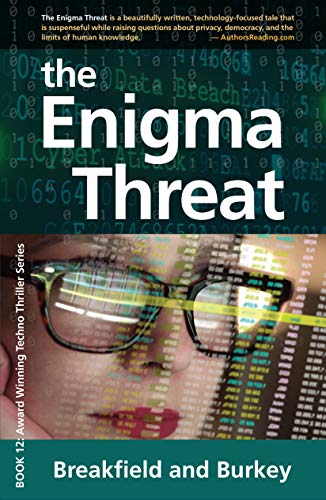 After what feels like an eternity has passed, Charles Breakfield and Roxanne Burkey grace our bookshelves with a new addition to their epic techno-thriller saga: The Enigma Threat. This new installment is brimming with excitement, adventure and the captivating character development that we have come to know and love from this series. Not only are we visited by characters we had grown attached to in previous books, we are introduced, quite literally, to the next generation. This sets the stage for future books in the series with a new cast and allows us to witness our favorites in the newest and most unpredictable role ever: as parents.

As in previous books, Breakfield and Burkey breakdown the intricate tale they are weaving into digestible chapters. While it might seem overwhelming to pick up a book with double-digit chapter listings, they are developed in such a way that it allows the reader to remain engaged and makes the scene changes easier to follow. The pacing is just quick enough that you won’t get bored, but not too fast that you feel completely lost. As always, it’s not completely necessary to read previous books in the series, however it lends an enormous amount of backstory and character development if you do.

With such a large cast it might be difficult to remember who appeared previously and who is completely new. This is fine for new readers, but for existing fans you may have to jog your memory a bit to place some of the characters in the Enigma timeline. This is a normal effect with series that have so many installments and that have been running for such a long time. While the specialized terms are  helpful, especially for newcomers or those not well versed in cyber technology and espionage, it might also be helpful to have a character list and identify which books they were previously seen in. This can help sort out who is new and who is returning, plus give new readers the opportunity to hunt down previous appearances by their favorite characters.

Charles Breakfield and Roxanne Burkey deliver another smashing installment to the Enigma series with The Enigma Threat. There is something for everyone in this exciting and gripping adventure. With characters new and old gracing the pages readers will find the excellent content they’ve come to love and expect from this amazing duo. You can’t go wrong adding this book to your library.

← Bullying: What are we really scared of?
Living with Internal Conflict →