← Charlotte’s Snowman – Author Interview
Their Ability To Be Loved → 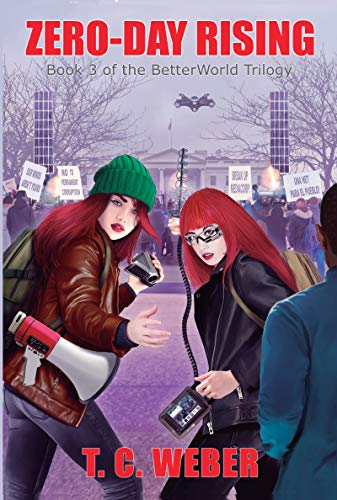 Zero Day Rising is the third book in author T.C. Weber’s BetterWorld series. It is a futuristic cyber thriller that tackles the issues of data privacy, an increasingly controlling government, and the role of digital giants in our daily lives; all issues that are relevant today. It tells the story of sisters Kiyoko and Waylee who are caught up in a fight against an insidious and ever-growing media conglomerate and a corrupt government.

Kiyoko and her team are an intriguing and likable bunch. It’s set up such that it’s basically them versus a pretty depressing world, but somehow it’s easy to have faith in their ability to pull through. I have recently become interested in cybersecurity and the role it plays in today’s world, so the hacking scenes were my favorite parts. I thought that the technology and jargon used in the book felt authentic, and I enjoyed reading about the psychological element that goes on behind the scenes.

Some of the explanations of the devices, like the ‘polyflex neal interface’ or the multiple mentions of the ‘peer-to-peer network’, were a bit on the technical side but were so interesting, and placed in context, that they’re easy to roll with. Overall, there’s a great balance the author achieves by making the action convincing yet immensely readable.

I particularly enjoyed the relevance of the plot in today’s world. The idea of the media in cahoots with the government, working to control people via information, no longer seems like a science fiction story. I can easily think of many global political scandals that involved the unfair use of data by social media giants and other media networks. It is interesting that this has started reflecting in fiction novels as well, as it makes reading T.C. Weber’s novel an engaging yet scary experience. Either way, I appreciated the way the author managed to create what could easily be an “alternate-universe” version of our planet. Even more, I loved the fact that the protagonist was a girl who was equipped with technical skills that rivaled most hackers’.

Overall, Zero Day Rising is a gritty technothriller that i would recommend to anyone who is interested in examining the dangerous ways information can be used against humanity. Or even for anyone just looking for a thrilling cyber-adventure.

← Charlotte’s Snowman – Author Interview
Their Ability To Be Loved →