Age of Magnus: The Iron Dawn 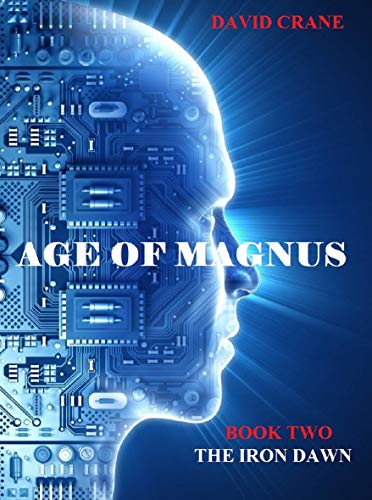 The Iron Dawn centers around a supercomputer named Magnus as its protagonist in a world one hundred years after a devastating pandemic is followed by a nuclear war. Magnus – created before the war to assist first-time exploration of planet Mars – survived and possessed full knowledge of human history and technological development. With this, it decided to take the survival of the human species into its own hands by taking over the world, Magnus was not met without resistance, however.

The Iron Dawn is an intellectually refreshing science fiction epic. The choice to tell this story from the viewpoint of an A.I., artificial intelligence, instead of the humans trying to beat it was new and provides an interesting take on a dystopian future society. It did have me wondering initially if we were following a villain or a hero, but Magnus’ morality was shown through how it treated humans, cared for humans, and how, in many cases, it thought like a human. This gave the novel good steam to move forward on while also keeping uncertain whether Magnus would go through a corruption arc or not.

Even though Magnus, as a character, had many strengths and endearing moments, it was not devoid of flaws especially with how it intended to deal with the current war against itself. Fortunately, there are many other characters we meet along the way that teach Magnus things that it never considered and caused it to reflect. This along with a bittersweet romance humanized Magnus to a great extent and made it that much more enjoyable to read.

However, a lot of the tension gradually falls away after Magnus experiences less pushback from both companions and enemies. This doesn’t take away too much of the whole novel, however, as we constantly meet new characters and come to understand the viewpoints of the antagonists the tension rises again as these people we care about are lied to. Though the initial tension never quite came back the same.

The setting itself was vivid, and it was intriguing to explore not only Earth in its post-apocalyptic stage but also Mars and its alluring new findings.

The Iron Dawn is a refreshing dystopian fiction with a visionary look at the future and an imaginative story that will keep science fiction fans entertained.