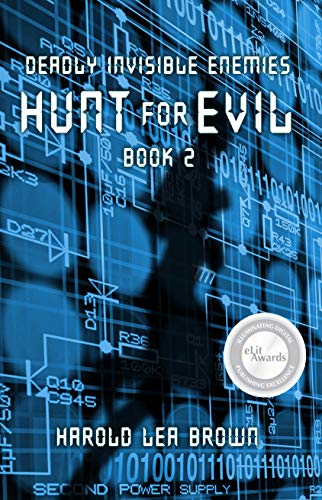 Deadly Invisible Enemies (Hunt for Evil) by Harold Lea Brown is the second book in the series. We continue to follow Kevin Albright who continues to fight a war against cybercrimes which led to the murder of his wife and son on their tenth wedding anniversary. He is now more than ever determined to catch his wife’s killers and while at it take down Big D who is hell-bent on killing him. His anger, guilt, and determination together with his intelligence are what give him an advantage over his enemies. The comparison he constantly makes between his late wife and co-worker is what helps him numb some of the pain of his loss and a bond between them grows.

Harold Lea Brown continues to show his unbeatable storytelling prowess as he smoothly connects the cliffhanger of book one with book two, clearing the suspense of Kevin’s death which had been faked by Kevin himself. Hunt for Evil has a fast pace compared to the first book with a quick succession of events within the plot. The mystery in this book is not any less than it is in the first book. Grief has been widely portrayed in the book as Kevin still hasn’t forgiven himself for what happened to his young family. He is filled with pain and rage and the same time. I love how Harold gets into Kevin’s mind making the reader feel connected to the character’s emotions and dilemma. Widely used dialogue within the book helps readers feel connected and involved in the story. The whole book is filled with mystery and sudden turn of events that keep the reader wanting more.

Hunt for Evil is a fast-paced turn cyberpunk thriller that possesses good character development and takes the reader through a rollercoaster of emotions. This is a suspenseful continuation of Harold Lea Brown’s Deadly Invisible Enemies technothriller series.