← Someone’s Story
Baby Out of Wedlock → 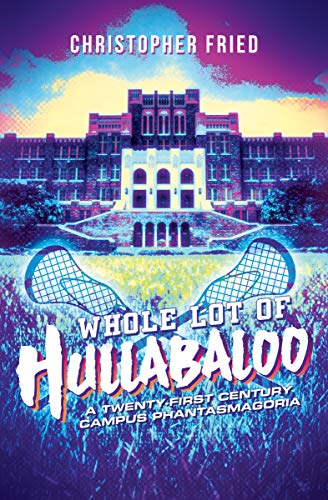 President Sam Castle dreams of making his third year in charge at Central Ohio University the best yet. But right off the bat, he’s hit by a flurry of events that threaten to sink his boat before it sails on its third voyage. His trials begin with his risky decision to take on a new faculty member laden with controversies. As he tries to defend his decision before the College Board of trustees, he feels relations fraying with his wife, who is away in Tokyo. He’s soon faced with another dicey situation that looks to mar his tenure. Ian, a free-spirited sophomore, dons a Halloween costume that lands him in hot water with the school’s black community and its outside allies. It seems Castle has to make an example out of the boy or risk ruining the school’s reputation. This is not the third year he envisaged. It’s left to be seen if Castle will come out of this in one piece and with the college still standing.

Christopher Fried’s Whole Lot of Hullabaloo is true to its name. It’s a journey into campus life marked by the raucous you’d expect in a relationship between pompous academics, politicking admins, exuberant youth, and the sometimes meddlesome outside world.

The emotional rollercoaster Fried takes readers on keeps things interesting. One moment you’re feeling sorry for someone, the next, you’re shaking your fists at another character’s action in righteous indignation. There’s also a nice dose of silliness that will make you chuckle from time to time.

I liked how Fried wraps his thoughts in an amusing tale. His serious themes shine through alright. But instead of weighing you down, they give you critical things to mull over.

The book touches on issues like some people using societal checks and balances to exert injustice and weaponizing public uproar for their selfish interests. Maybe this would be a lot harder if the public wasn’t so inclined to lynch reported culprits of social injustices without first doing its due diligence. But that’s just me thinking out loud.

Fried also addresses our tendency to lean into extremes. On the one hand, we can be so lax about social issues like racism that they go unchecked. On the other hand, we can blow them out of proportion and try to trace every societal ill to them somehow. Fried’s issue is with the latter.

Whole Lot of Hullabaloo is a quick and easy read that is as entertaining as it is thought-provoking.

← Someone’s Story
Baby Out of Wedlock →