Heart of the Highlands: The Raven 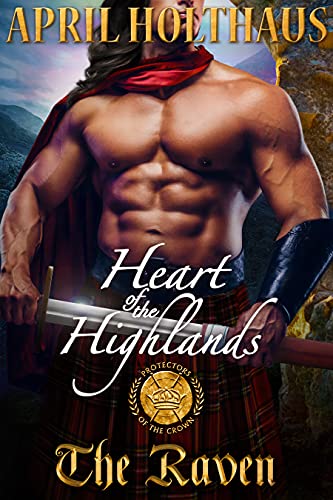 Heart of the Highlands: The Raven by April Holthaus is a historical medieval romance set in Scotland and England in 1529. Lady Adelyn Scott flees from England to Edinburgh Castle in Scotland to seek asylum from King James when she is falsely accused of murdering her husband on their wedding night. Baron Eamon MacLeish is one of the king’s personal guards and advisors, and he promises to protect Lady Adelyn and help her prove her innocence, while keeping her true identity a secret. When Lady Adelyn’s whereabouts are discovered and she is captured by agents of King Henry, will Eamon be able to save her?

Author April Holthaus richly imagines the Scottish Highlands makes them feel authentic and exotic. This is a perfect setting for this historical romance novel to unfold as it has a rich atmosphere that elevates that drama. I liked the inclusion of real historical figures and events in this book, which gave the story an air of realism. It was also interesting to read the scenes where Lady Adelyn was learning about the art of healing with herbs from the castle healer. My favorite aspects were seeing the developing feelings Adelyn and Eamon had for each other as they spent time together and got to know one another, and the part where he risks his own life when he sets out to save her and plans how to help her escape for the Tower of London. Their relationship slowly develops into something that is alluring and passionate and I enjoyed the emotional roller-coaster. When the true murderer was finally revealed at the end of the story, it came as a surprise to me. This is a historical murder mystery that weaves in and out of a love story, and the effortless combination of the two make this story feel original.

This could also be considered a historical political drama as well, that appealed less to me then the stirring romance, but anyone who enjoys historical fiction will find plenty to love about the details and nuance of 1500’s politics. While I enjoyed the story overall, I felt that there were some aspects of the story that could have been explained more thoroughly as they had caused some confusion for me, especially in regard to Lady Adelyn’s family background.

Heart of the Highlands: The Raven is a spellbinding historical romance novel that delivers a mesmerizing main character in an enchanting land with some harrowing twists throughout this riveting novel.