← Self-Publish & Succeed: The No Boring Books Way to Writing a Non-Fiction Book that Sells
Heart of the Highlands: The Raven → 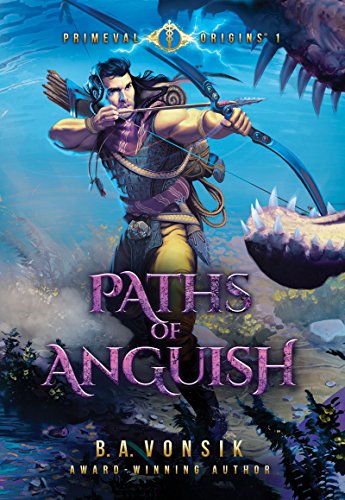 Paths of Anguish by BA Vonsik is an epic fantasy-adventure novel that begins in the present and ends up in fantastical times and places. It all starts when a strange artifact is discovered at an archeological site by a young paleontology student, Nikki. The mystery object seems to possess some space-time continuum bending properties and she is soon transported to the ancient past when a literal hole-in-the-ground opens up beneath her. She finds herself in a different time and place, and even a different person, in a place where where the rules are unknown and the dangers seem unstoppable.

The world-building in this story is spectacular. It makes for some dense reading but I feel like I’m being transported into a totally different world. It’s atmospheric and the tiniest details are given attention– from the misty breezes to the glint of a blade. The descriptions make it much more atmospheric. This is not to say the book is slow, rather, it is well-paced. The action scenes had me flipping pages and kept me engrossed in the story.

I was enthralled by the dynamic between Rogaan and Pax, and their complex internal lives. Their journey is physical as well as a mental one– especially for Rogaan. He really had some not-the-brightest-bulb moments but was nonetheless endearing. Watching their friendship get tested under the stress of survival and competition was intense but I was rooting for them throughout. The political drama was also a large part of the story and the different ways in which interpersonal relationships changed and stayed the same was fascinating.

Paths of Anguish has some deep world-building and a lot of new vocabulary for the different creatures, vegetation, people and their positions in society. This can be overwhelming at first but really just creates the perfect story for escapists or anyone looking for a well defined fantasy world to get lost in. This is a riveting adventure novel that I think will appeal to readers who like Mistborn or The Six of Crows. Paths of Anguish is a thrilling start to an epic fantasy series.

← Self-Publish & Succeed: The No Boring Books Way to Writing a Non-Fiction Book that Sells
Heart of the Highlands: The Raven →