← The Amazing Adventures of Oliver the Wonder Dog
MY NAME IS ROBERT! – Book Trailer → 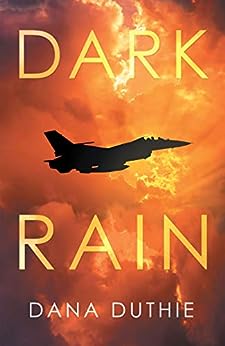 Dark Rain is an exciting terrorist thriller written by former Air Force Pilot, Dana Duthie. The story opens up with the protagonist, Col. Brad Mitchell “Conan” flying in his F-16 along with his wingman who turns out to be an impersonator. At the same time, a series of similar “Starkville” penetration unfold at different parts of the States, including a failed attempt to bring down the White House. The investigation into the “Starkville” families reveals Barak El-Kamani as the main handler who is pulling all the strings.

Duthie has expertly utilized his twenty-four years of Air Force experience to paint a realistic picture of military operations with a detailed account of events, from the cockpit of the fighter jet to the White House Situation Room. The author has given a great deal of attention to character development as well. President McDivitt’s role remains refreshing throughout the operation. The Washington Post reporter portrays the tendency of media to go to any ends to get the news. The chapters are brief but very engaging, rarely losing focus on the action and events that are propelling this story forward. The chapters are organized according to the place where the events unfold. This allows the reader to understand the full scope of the story. Which is vital because this is a global story with far reaching effects. The riveting action in the story reminds me of the movie Top Gun, but mixed with the intrigue of Robert Ludlum novels.

Dark Rain is both a novel and an encyclopedia at the same time. The author has included a plethora of military and fighter pilot jargon which is likely to be a delight to any military enthusiast. While the beginning half of the book sets up the larger storyline, the ending half of the book is filled with thrilling action and combat. For anyone with a military background, especially the Air Force, Dark Rain is a goldmine.

Dark Rain is a captivating military thriller that takes readers around the globe and places them in the middle of some high stakes world politics that ensures there’s rarely a dull moment in this suspenseful action novel.

← The Amazing Adventures of Oliver the Wonder Dog
MY NAME IS ROBERT! – Book Trailer →