The Bards Of Birchtree Hall 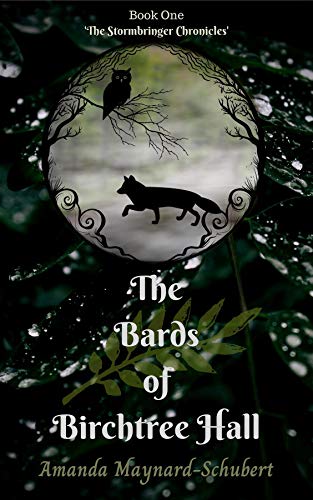 After the death of her father wrecked Naela’s mother- Dana- she agrees to move with her to Ireland, where her fathers family had lived on farmland for generations. Living in her family’s homeland is unexpected in so many ways and she makes a shocking discovery. She finds that she is a Bard, part human and part faerie, and that she possesses magical powers that she must learn to control and hide. Not only does she have to deal with her gift, she also starts experiencing strange occurrences. She receives a mysterious visitor in her dreams who claims she is “Naela Stormbringer”. She touches a tree on her family’s estate and sudden pain starts in her birthmark- the one shaped like a leaf. She has visions of a yellow-eyed horse coming out of the ocean. And she receives an invitation to an exclusive and mysterious academy of which she can find no information. What is the meaning of all this, and what is her connection to thunderstorms?

The Bards of Birchtree Hall by Amanda Maynard-Schubert is an enchanting young adult fantasy novel, which is the first book in the spellbinding Stormbringer Chronicles series. Written in the third person, the story mainly follows Naela- A smart and caring girl who has to deal with her father’s recent death and her mother’s decision to move to Ireland. As she makes beguiling discoveries about herself and her ancestors, Naela proves to be just as stubborn and cunning.

The world building is amazing. Author Amanda Maynard-Schubert has created a magical world to which Naela is new to, so the reader is gradually introduced to the workings of this magic through Naelas own experiences. This is a great way to introduce readers to a series that looks to have great depth to its lore and backstory.

The story ends on a cliffhanger, no surprises there as this is the beginning of a series, but this allows for a bigger and more complex plot to follow in the sequel. As an avid fantasy fan I highly recommend this book for its originality and creativity. The Bards Of Birchtree Hall is a thrilling sword and sorcery adventure novel that will appeal to young adult fans looking for a novel with depth.