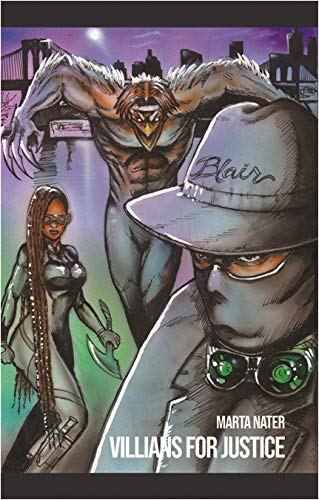 Villains for Justice is Marta Nater’s provocative idea of a modern world where super-powerful villains take justice into their own hands to hunt down the most horrible criminals that exist. The book starts with Nina Dansk’s story, a woman tired of seeing her loved ones and regular people constantly abused by a legal system that neglects its victims and that doesn’t provide adequate punishment for criminals. Nina Dansk’s story is very detailed and starts from her childhood, so the reader can easily follow how Nina’s mentality slowly changes to the point where she abruptly decides to punish rapists, predators and sexual abusers by viciously killing them, fighting for the protection of abused children and women.

The book also follows the story of other captivating villains. Jerico Raven, an ex-detective passionate about law and justice, and Shadow Claw, a mysterious man-hybrid with hawk-like features also take justice into their hands, this time to fight off the crime and corruption that was abundant in the streets of New York. Later on Cora Rollins is also introduced, an ex-police officer that was inspired by Nina Dansk’s story and decided to follow her path, becoming possibly the worst villain of all, torturing and murdering exclusively sexual abusers and predators.

Hunted by the authorities and loved by the regular people, these intriguing villains keep their promises as vengeful vigilantes, giving a new meaning to the word justice and thus gaining the respect and admiration of those who had been living under fear throughout their entire lives. This book serves as a reflection of modern day society and showcases how constantly the real victims are left unprotected while the criminals are sheltered and given new opportunities to live among those they hurt the most. Through the main characters, we see how the suffering they endured transforms into anger and thirst for revenge, at times going too far and ending in tragedy.

The characters presented are quite interesting and have complex and compelling storylines. I enjoyed reading each of their motives and how they carried out their plans to bring justice to the world and save abused children. While I enjoyed the story I felt it could use another edit, but the story is gripping enough and presents some entertaining scenes. The idea of villains that want to punish criminals is interesting and pulled off in creative ways throughout the story, it kept me wanting to find out constantly how the story was going to end. This is a story about revenge and taking justice into one’s hand, with the understanding that sometimes good intentions may build a terrible path that ends in tragedy.

Villains for Justice by Marta Nater rousing crime fiction novel with interesting characters that embark on an entertaining revenge rampage throughout the city.