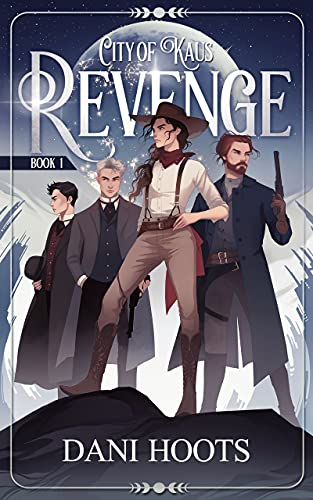 Revenge by Dani Hoots takes readers on a mystical adventure with fascinating characters along an action-packed quest for retribution. The story takes place on a planet filled with beings of various races-some humanlike and others with supernatural traits. There is a mutually understood hierarchy of the races, making life far more difficult and dangerous for those in the ‘lower class’, like our main characters.

This page-turner is written in alternating first-person points of view, allowing us to learn and empathize with all sides of the story. We meet Ellie and Zach, childhood best friends who are now forced to take bounty hunter jobs and live on the run, in order to survive. We learn this is due to a betrayal of their people leading to an attack on their zone and the demise of their race. They believe the culprit may have been their other best friend, and also Ellie’s ex-fiance, Cor. Ellie is determined to seek revenge on the man who not only broke her heart, but betrayed their entire race, leading to the deaths of their friends and family.

If you’re not generally into the science fiction / fantasy genre- this may be the book to change your mind! Hoots has a way of speaking through her characters that leaves you feeling deeply connected to them, despite their fantastical features. The basis of the story itself is a relatable tale as old as time- a heartbroken woman seeks vengeance on the man who deceived her. The clever world that Hoot’s creates complicated twists and turns, featuring revelations of hidden truths and forbidden feelings. Between the LGBTQ-friendly sensual vibe, and nerve-wracking near-death experiences- this one is sure to keep readers entertained.

Revenge is a science fiction adventure story that is fun to follow and is easy to get lost in.