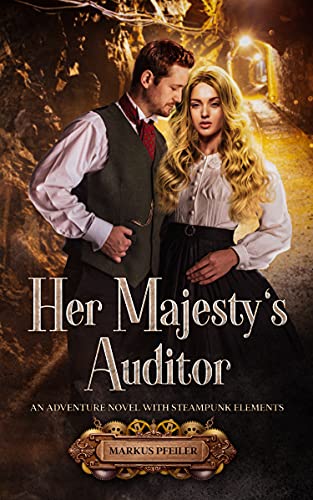 Howard Forsyth was a man of privilege, living with no small amount of wealth left from his father, and earning a decent living himself as an auditor for no less than the Queen. Despite all he already has, his one goal is to help change the classist system that prevents him from being with Adeline, a lower class southern girl employed in his home and the one true love of his life. When Howard starts a job at the Queen’s mines and realizes that Fitzugh White, the formidable former soldier in charge there, has nefarious plans, it is Adeline who risks everything to help him.

The Queen’s Auditor by Markus Pfeiler is an action packed book that combines romance, risk, treason, and steampunk elements, all set to the backdrop of Victorian England. Told from alternating points of view, the story is short but makes effective use of the space it has. Pfeiler does an excellent job of making the story flow while never seeming rushed. His ability to infuse the text with such vivid character backgrounds and key details show in subtly clever ways all throughout. The action is likewise written quite well.

While there are some other moments that exist to move the story along, action and romance take the center stage here. Howard and Adeline’s love is tortured because society says they can’t be together, and it encourages both of them toward an activism that is mentioned but never really explored during the course of the book. As it didn’t move the plot along in a huge way, that’s understandable. Howard spends much of his time away from Adeline treading thin ice in the face of treacherous Fitzugh, facing the constant threat of danger. The two extreme themes do well to balance each other out. With some editing issues that can be ironed with a quick edit, this is can be a top notch book once addressed.

The Queen’s Auditor was pure and simple fun, and the train scene was riveting. This is a thrilling mystery novel with an exciting blend of steampunk, romance, and adventure that takes this novel in unexpected but dramatic directions.