A Price to Pay follows a sorceress who is struggling to regain her memory as she works to reclaim her role as duchess and decide her nations future. What were some sources that informed this novels development?

Since I used amnesia as a plot device, you can be forgiven for thinking I watch soap operas. I actually don’t … well, there was that one … but I like to forget about that … um, never mind. There’s also the brilliant classic, “A Christmas Carol,” which fascinated me ever since I saw the Disney animated special. And let’s not forget the tagline on the book cover, which indicates the top reason why I wrote this book: our 45th U.S. Presidency.

Sorceress Melindra is a character that I enjoyed following and watching evolve throughout the novel. What were some driving ideals behind her character?

Charles Dickens wrote “A Christmas Carol” in response to the unscrupulous business practices rampant in London. The moral is that one’s attitude and actions not only have an effect on one’s legacy, but also the wellbeing of those around you.

The same idea is in “A Price to Pay” but told in a more pessimistic way. While Ebenezer Scrooge was able to turn his life around by choice, the sorceress Melindra had to have amnesia first to do the same. If given a choice, the old Melindra would have never changed her ways by righting her wrongs; she had to have become a blank slate first and see her situation through a fresh perspective.

This of course ties in with my perspective of No. 45, who—as a coworker once said—always says the wrong things. These last four years have been quite a ride for me, as I’d never been so concerned about what our President was doing. U.S. Presidents are naturally controversial, but this guy was something else. It’s my belief that he’ll never change his ways, never see the damage he’s caused through his influence.

This story is a way for me to allow readers to see how I’ve viewed 45 through the eyes of the MC. Once Melindra reassumed her role as a duchess, she’s initially concerned by how her servants openly fear her, and she’s then alarmed and appalled by one thing after another. I hope the reader can keep in mind that many of these “things” are allegories to the 45th administration.

For example, in the ballroom scene the guests are left speechless when something terrible happens, which is reflective of how certain Congressmen kept mum after an insensitive tweet from 45. There’s also the near-assassination scene which is reflective of the culture of conspiracy that grips the nation. Melindra is astonished by these events just as I’ve continually been these past four years.

There’s the idea from “A Christmas Carol” that everyone can have a profound impact on others. This pertains not only to what Melindra did but also what others have done to her. Melindra and 45 hadn’t led similar lives, but one thing they have in common is that they were both demeaned and demoralized, leading to twisted outlooks on life.

Melindra’s early life wasn’t all bad: She had loving parents and a neighbor who taught her how to read. But whatever good was going to come from that was ruined by some of the uglier aspects of her medieval-type society, teaching her that she had to fend for herself since there were few who would. And unfortunately, this led to a slightly nihilistic attitude, for she believed that what happened to others didn’t matter as long as bad things didn’t happen to her. Such an attitude can be hard to shake off once instilled; hence why Melindra needed to become a blank slate to do it.

I have no plans as of now to keep writing. I thought I’d be done after “The Binding of the Three Roses,” but then the writing bug bit me and I had to act on it. The bug hasn’t bitten ever since, so I don’t know. Writing “A Price to Pay” has been satisfying, so no regrets.

A Price to Pay 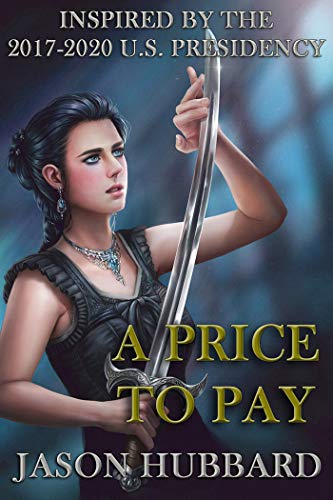 A Price to Pay by Jason Hubbard is one of the most entertaining fantasy books of 2021 for me. Have you ever wondered what it would be like to wake up and not remember who you are? That is what duchess Melindra is experiencing. As she makes her way through daily life, it becomes apparent that her personality was absolutely vial. Servants are terrified of her, and people with questionable morals are her closest friends. The more Melindra uncovers about her life, the more she feels the need to enact great change. What price will she pay to right her wrongs?

Entertaining is the first word that comes to mind when I think about this novel! When Melindra first wakes up in Vincent’s castle she feels lost, confused, and scared. Hubbard’s portrays these emotions  in stirring fashion that makes the characters feel effortlessly emotive. He completely transports readers into Melindra’s mind and has you grapple wit the emotional turmoil with her. I also enjoyed the slow but steady process of Melindra beginning to grasp who she was before the memory loss. Hubbard took his time with this process, spanning it over the entirety of the story, which gave it a realistic feel. I also really enjoyed the depth of the world the story is set in and how it crossed over into our own present day. While I found the magic system in this novel intriguing, I wanted there to be more nuance.

The story is inspired by the 2017-2020 presidency. After a statement like this, I spent the whole story trying to find what could have been inspired by true events. By the end, I wasn’t sure what part was actually inspired by the presidency, besides corruption, and it all felt like thoughtful commentary on society. Some readers may enjoy this infusion of reality in their fantasy story.

A Price to Pay is an entertaining read that is told in Jason’s Hubbard’s signature style, that sword and sorcery fans will quickly devour. A refined and relevant epic fantasy story that shows you the power of a single persons actions.