A Lot Of My Emotions

Beasts follows an alpha female struggling to protect her pack while keeping her past behind her. What was the inspiration for the setup to this thrilling story?

It actually evolved from a different idea I’d had. I was sort of trying to do a new take on vampires and werewolves, but wanted to be unique. Instead I added the lycans.

Selene is an intriguing and well developed character. What were some driving ideals behind her character development?

I was suffering the loss of someone very important to me when I wrote this. Selene actually helped me work through a lot of my emotions and heal like she did.

I enjoyed Selene’s romantic relationship as it was tense and provocative. What were some themes you wanted to capture in their relationship?

Trust for sure. I wanted them to know they had each other no matter what anyone in their past taught them about love. They were both dealing with a lot of tense emotions- family issues, grief, shame – and had to somehow defeat their enemies at the same time.

Currently, I have a Greek Mythology series in the works. I’m not sure when I’ll release the first book, as it’s proving to be a very big plot. 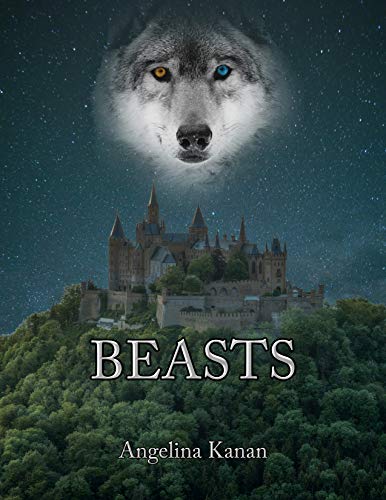 Beasts by Angelina Kanan is a classic example of the paranormal werewolf genre. Selene Knight is an alpha struggling to find her place in the world after the tragic death of her sister. For years she has run away from her past, but she is unable to continue avoiding it when an increase in wendigo sightings forces her to pay a visit to her brother, which also means having to encounter her estranged father and the bitter memories of her childhood home. Add the stress of a burgeoning relationship with her elusive mate, and Selene has a lot on her plate.

Beasts contains elements that will please fans of werewolf romance, including a mysterious and sexy mate with a tragic past, and an abundance of conflict stemming from the politics within and between packs. While the story line is enthralling, I was left wanting more from the scenes meant to be exciting, tense, or romantic. While the old adage “show, don’t tell” could be used here to draw readers further into this imaginative world. Much of the narration is devoted to explaining the relationships between characters and how those characters feel, as well as how Selene herself feels.

The most compelling character is Selene; as a female alpha who leads a small pack and is plagued by a host of demons from her past, readers will root for Selene to succeed. Her mate also proves to be an interesting character, with the question of his identity being the first of many mysteries Selene unravels as she gets to know him. Also strong are the connections between Selene and her deceased sister, as well as her brother. These sibling relationships, filled with love and loss, are touching. The rest of the characters blend together. Brett is the “sassy male friend who loves clothes and makeup” stereotype, while the other members of Selene’s pack come to the foreground when they are important to the plot.

The strongest aspect of this book is the plot, which presents some interesting conflicts and surprising reveals. Many readers will likely enjoy the relationship between Selene and her handsome mate.