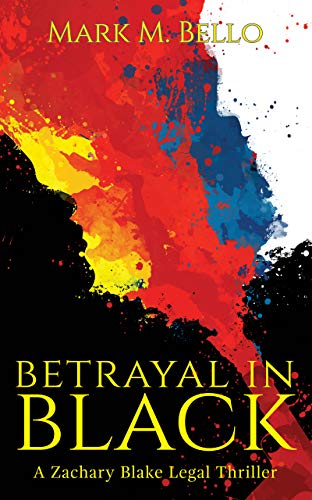 In a fictional city, a black couple is coming back from a fair when they are mistakenly stopped by a police officer, unfortunately, it ends with a murder. What follows is the complex dichotomy inside the police department, the obstacles that a mother and recent widow has to endure for justice, and the length to which the parties that seek to benefit from this tragedy will go.

A Betrayal in Black by Mark M. Bello is a story that doesn’t shy away from the harsh reality that black people in America face and how they have to adapt in order to survive.

A Betrayal in Black opens up in a lighthearted way and then transitions to a much darker and cruder story. Throughout the story I felt that the author had a clear understanding of law and police affairs.

When it comes to the technical parts of the story, Bello does a great job of immersing the reader into the world of law and order, with details that show the deep knowledge he has over legal prosecutions and police internal affairs. However, while this is immersing, it sometimes gets tedious and almost didactic, for example, when describing what a grand jury is, it almost feels like you are reading a law school book. But this is a minor flaw in an otherwise engaging story. The dialogue was interesting, and could even be funny at times.

A remarkable thing about this book is how it details every single aspect that goes into a case, from the murder itself to the conviction, all throughout detailing the victims grieving and the lawyers seeking justice. A particularly moving chapter is when the wife of the victim is speaking with their mother and they are retelling a story of how racism has evolved in this country, and, as angry as she may be, she can’t show it, because she is a woman of color.

This book was written in 2019, but the murder it describes is all too recent. The different ways black people have to think to present themselves to white people in order to be considered “equals” and not be dismissed as rude, is all too familiar. The themes in this book come at a crucial time, where stories like these are needed to paint a more vivid picture of the struggles minorities face in America. A Betrayal in Black is a must read.