The Magic of The Great Synergy

The Search For Synergy follows two young men brought together by destiny who must work together to defeat the evil threatening their world. What was the inspiration for the setup to your story?

I’ve been inspired by many things while writing my books. For this series in particular, I used my influences that range from video games to anime to fantasy novels from my childhood to my own personal experiences. I ran the whole gambit of inspiration! Honestly, I just wanted to create a series that told a coming-of-age story with relatable characters, references to mythical lore, and plenty of unforgettable action to keep my readers turning the pages. My goal was to create something that caused readers to speculate and theorize about, ya know? A buzz around the water cooler. Or, I guess a buzz around the water fountain since I write for a MG/YA audience.

Rome and Julian are intriguing and well-developed characters. What were some driving ideals behind your character’s development?

So, I originally wanted the book(s) to be about ONLY those two characters. And the reason behind that was because I wanted to incorporate an idea I had a while back about making two sides of a person’s personality represented by two strikingly different characters. You can read about this on my Fandom Wiki page (link below), but Rome and Julian are meant to be complete opposites in as many ways as I could think of (physical traits, family status, the way they interact with others, their reactions, their hesitation or brashness, even their knowledge of the real world). But as they are two sides of the same coin, they are brought together and solidified as a symbiotic unit by The Great Synergy. It is even reflected in the title of the book. Their individual searches AND their lives are forever realized mortally bound by the magic of The Great Synergy.

I wanted the book to seem like a quest for answers. But not on a grandiose, epic scale. Just on a small-town, local kid in school kind of thing. I wanted to make the perspective seem to emphasize how a teenager might see THEIR world as being all encompassing even though it’s relatively microscopic compared to the real world. It’s a small step in the ever-growing narrative of my series that takes my characters deeper into the “real world” and exponentially raising the stakes with every installment. The journey of 1,000 steps begins with one, and “The Search For Synergy” is Rome and Julian’s metaphorical first step in the proposed 12-book adventure.

Although I have “written” 11 of my planned 12 books, I still have much work to do on the next book in the series. That would be book number five of The Talisman Series. My goal is to have the fifth book out late winter of 2022. Think Valentine’s Day time frame! Just in time to grab the new book and curl up on a chilly night with that dragon lover in your life. But until then, this is just a friendly reminder to hold your Talisman tight and keep a wary eye out for portals! 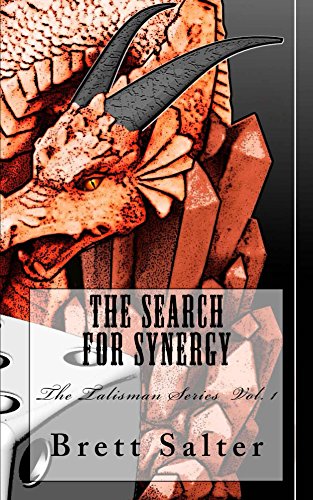