The Abuse They’d Both Suffered

Claimed by Rafa is book two in your Raiden Warriors sci-fi series. What were some ideas that you wanted to introduce in this book that were different from book one?

In book 1, Claimed by Nicolai, I focused mainly on Raiden society, a patriarchal society. The warriors have been raised to appreciate females, but not necessarily respect them. When she is claimed against her will, Abby begins to show their prince the error of their ways—though she’s aware that nothing so set in stone like this will be easily changed. We begin Claimed by Rafa in much the same way, with Aaliyah, Abby’s best friend, being claimed against her will. In Rafa’s case, I’d hoped to not only get through to him how wrong it was to claim a female without getting her permission first, but to learn to empathize with Aaliyah’s unique situation. Aaliyah came from an abusive past, and anyone who has personal experience with sexual and/or physical abuse will tell you it isn’t something you just get over. You have to learn how to take charge of your life, which is easier said than done. I believe I found a way in Claimed by Rafa to get through to Rafa just how traumatizing abuse like Aaliyah suffered can be. In the same breath, I wanted to get across that there is always hope for a better tomorrow. We must learn to love ourselves before we can love others, and not let our past dictate the rest of our tomorrows.

I also wanted to get through in this story that everyone carries around excess baggage. Aaliyah was probably the most damaged by her past, but Rafa had troubles of his own, a past he didn’t want to face. He had to let Aaliyah inside his own defenses.

Aaliyah has had an abusive past and she was a character I empathized with. What were some sources that informed her character’s backstory?

I watch a show on television called “My 600 Pound Life.” It shocked me how many of these people suffered sexual abuse as children, and the devastating effect it had on their lives. Though I know they have a rough road ahead of them, I always find myself happy and excited when they start to take control of their lives. Aaliyah doesn’t turn to food because of her abuse, but she does put up thick walls. No one who goes through something like this will come out of it without scars. I find some of the worst scars people carry around are those to their psyche, not something others can easily see or understand. It was a challenge to figure out a way for Rafa to get through her defenses, but he couldn’t help her unless he began to understand the depth of the trauma she’d suffered.

I wanted to keep the focus on the building love and respect these two characters learn to have for one another, not necessarily the abuse they’d both suffered. I’m also building on a continuing plot that connects my Immortal Warriors series with this one. The Djinn, who are introduced in this story, are enemies of both sets of warriors. Aaliyah has a special connection to the Djinn that will carry over to future books.

What can readers expect in book three of your Raiden Warriors series?

In Claimed by Rafa we are introduced to Samantha, Abby’s vivacious younger sister. Her story will be told in Claimed by Seraphym, book 3 of Raiden Warriors. We first met Seraphym in book 1, Claimed by Nicolai. Seraphym is a dragon shifter whom a lot of my readers appeared to be fascinated with. We begin to learn a lot more about Abby and Samantha’s connection to the dragons in book 3. Samantha was a fun character. When she was younger, she used to dream about the day she would get claimed by a handsome Raiden warrior. Now that she’s grown, she will do everything in her power to escape it, even if it means asking for sanctuary from a dragon clan. 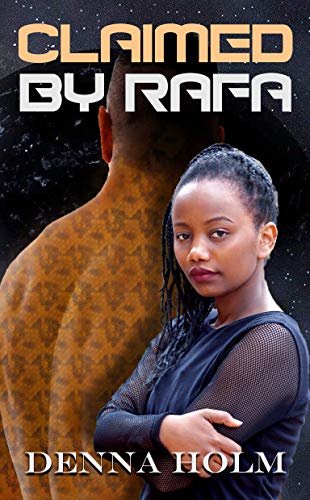 Rafael Abeden has reached the point in a Raiden males life that it was time to find a mate. Raiden males have the problem of not being able to procreate with their own species so Rafael must find another one to claim and fall in love with. He is set on finding a human woman like his best friend, and prince, Nicolai did. Rafael heads to earth with Nicolai and his mate Abby where he meets her best friend Aaliyah. At once he knew she was the one for him. Aaliyah has had a hard life of abuse and mistreatment. Rafael wants to take all her pain away and show her what it is to feel love. This is a tremendous battle and along the way both discover things they never knew were possible all while trying to stop Nicolai’s enemies from killing him and Abby.

The setting for this novel is mostly aboard the ship Qadira. They use the reference of Star Trek a lot to try and explain things as that is a known cultural norm. The descriptions of the different aliens they encounter are vivid and well thought out. As with the Star Trek references, she uses a lot of human descriptions or animals or dinosaurs to convey what is happening on the alien worlds. This makes it easy for the reader to identify with Aaliyah seeing things for the first time.

As we get deeper into the book and learn about Aaliyah’s past, I felt the anger and frustrations that she has from living through so much pain. Seeing how she was treated by other humans before leaving Earth filled me with anger. This is a testament to Denna Holm’s ability to pull emotions from the reader and give them a connection to the characters. You want to see Aaliyah happy; you feel Abby’s anger at the male posturing, Samantha is your typical teenager and stubborn but adventurous all in one. All the women are fighters, none are weak and docile. The Raiden men appreciate these traits and encourage them.

Of all the different aliens mentioned in the book, I found the Djinn especially interesting. This book hinted that possibly the next one will go more into the Djinn people and how they tie in with the Raiden’s, or at least I hope so. Claimed by Rafa was a unique and deeply engaging novel. I look forward to reading more novels from Denna Holm and certainly more entries int this fantastic series.

Rafa didn’t think much of the human female when his prince first claimed her for a mate, but her strength of character soon wins him over. He watches with jealous eyes as the love blossoms between them, especially when she begins to swell with the prince’s child. When Rafa’s shaprata begins to mature, and the time arrives for him to claim a mate, he decides to return to Earth to claim a human of his own.

Aaliyah was left devastated when her best friend went missing. Abby was last seen hiking with her faithful German shepherd near one of Oregon’s mountain lakes. Six months later, Aaliyah receives a phone call, the woman on the other end claiming to be Abby, and she wants Aaliyah to drive up to the same lake to meet her … alone.

Emotionally, Aaliyah isn’t as strong as Abby. She’s had a rough childhood and considers herself damaged goods. When the alien tries to claim her, she rejects their union, not sure she is capable of loving a man, even if it means Rafa might die.