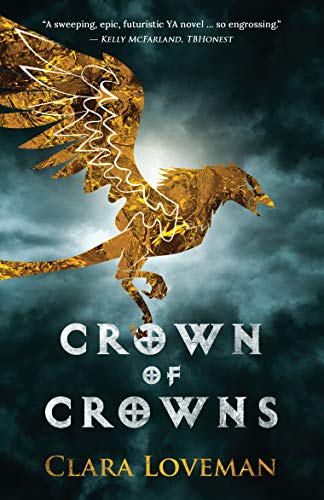 As a daughter of one of the ruling families of Geniverd, Kaelyn has never known anything outside of her life of privilege and protection. She begins to realize the depth of that privilege when she meets Roki and learns more about the struggles of the common people. Through personal tragedies and charitable work, Kaelyn’s life changes drastically in just three years, but she is unaware that the changes are about to escalate quickly, and in ways she could never have imagined. Suddenly faced with more power and knowledge than she thought existed, Kaelyn has to become the savior Geniverd didn’t know it needed.

Crown of Crowns by Clara Loveman takes place on a dystopian-esque planet named Geniverd where disease has been nearly eradicated, natural births are against the moral code, and machines do every job previously held by humans. The ruling class, with royal families on each of the six continents, live in luxury and are insulated from any of the problems faced by the rest of the population. Kaelyn never questioned the traditions that her family, and the other elitists, followed until her mid-teens when she realizes just how much of a division they have actually created within the world and the majority of the people. At that point, Crown of Crowns moves the narrative along at a breakneck pace, as Loveman introduces a barrage of situations that forces Kaelyn to quickly mature, as she struggles with an ever-changing worldview. The story is a smooth and easy read for the most part, although the language occasionally reverts to almost adolescent type slang, which is jarring and a departure from the overall competent tone of the book.

Crown of Crowns deals heavily with the theme of morality, and the idea of doing what is right versus doing what has always been done. Kaelyn makes it clear early on that she believes tradition isn’t always what’s best, especially when a majority of people are suffering as a result. Her beliefs form initially from a place of selfishness (tradition would keep her from being with the person she loves) but as she grows and learns more about the world, she sees that genuine change is necessary for the people to thrive.

Reading Crown of Crowns right now was also incredibly interesting because there were key plot points that reflected issues in our current society, namely an unforeseen pandemic and severe social unrest caused by years of disregard for the “common” people. The characters were engaging and I was invested in discovering what Kaelyn would do next, however, the book ends abruptly, leaving loose ends and questions to be answered in a followup novel. Crown of Crows is an epic dystopian fantasy novel that will entertain young-adult fans.