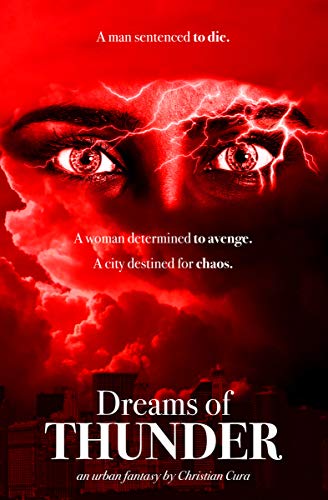 Christian Cura’s Dreams of Thunder, the follow-up to Dreams of Fire, follows a familiar cast of characters – Daniela, Kara, Selene, and the rest of the Council – as they undergo life-altering revelations and fight off a vengeful demon army that threatens to endanger humanity.

Dreams of Thunder has two major plot lines – Daniela learning that she is a mystic being, alongside Saba Qureshi’s devious plot to avenge the wrongs done to her family by the Council.

The storyline involving Saba’s plan for revenge, and the Council’s response to the threat against humanity, is where the bulk of the action lies. The classic good versus evil struggle comes to life. Saba, a mystic who is hell-bent on creating a world devoid of mortals, wants to begin her conquest by using an army of demons and Canadian ex-convicts to wreak havoc in the greater New York City area. The Enforcers of the Council, many of whom hold official posts in government, see this threat and take it upon themselves to protect the mortals with whom they coexist. There are many battle scenes involving various Enforcers and demons, leading up to a final battle filled with carnage, revelations, and a final resolution for peace.

The only part that fell short for me was the character development surrounding Daniela Rivera. The story is so focused on the fight between Saba’s army and the enforcers that Daniela’s involvement in the plot feels more like an afterthought. Given the significance of her finding out that she comes from a line of particularly powerful mystics, I as a reader would have wanted her to play a more integral role.

There are depictions of violence and sexual acts so be warned, but it’s not over the top so I still recommend the book. Overall, Dreams of Thunder is a well-written young adult novel that anyone interested in magical and fantasy themes is sure to enjoy.