Escaping Home follows Christine into the past where a rogue agent follows her and threatens to disrupt the timeline. What inspired the setup to this riveting story?

Christine has dealt with a few nefarious characters in the two previous books in the series. In this installment, I wanted to explore what might happen if someone were careless enough to travel back in time with no regard for history. With the world on the brink of war, people would do things they might not ordinarily consider. The possibility of a nuclear war could encourage someone to take risks, thinking there would be no consequences. Of course, Christine and her friends can’t let that happen, especially when they are the reason the rogue agent is in the 1700s to begin with.

First and foremost, I wanted to get the characters emotions right. Going back to the eighteenth century and surviving would take everything they were made of. It was important to relay their emotional struggle to the reader, so they could place themselves there. Second, I challenged myself to make it as historically accurate as I could. In order to really feel like the reader was a part of this story, they had to know what it was like to live in 1790. The language, the clothing, the city, all had to be authentic.

What were some obstacles you felt were important to developing Christine’s character in this novel?

Christine is a complicated character. She has a tendency to be a loner. She has grown in last two books, but she still clings to the notion that she has to be strong for everyone else all the time. In this book we got to see her personality soften even more. She eventually gets her happy ending, and after all she has been through, it was well deserved!

My next book is part of a time travel trilogy with a different twist. It is due out in September of 2022. Without giving too much away, here is a little teaser.

What was supposed to be a few days in the nineteenth century with two of Hollywood’s biggest celebrities goes horribly awry. Now America’s hottest starlet is dead, and Jack the Ripper in on the loose in modern day America. And it’s all my fault.

I was foolish enough to let history’s most ruthless serial killer slip out of the past. But am I smart enough to send him packing? 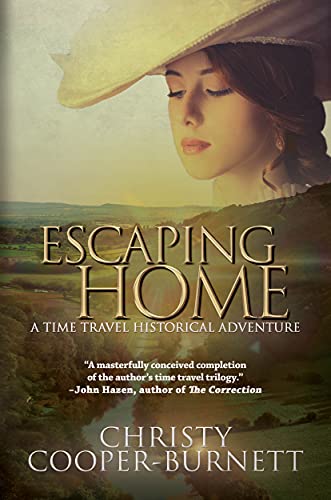 This riveting time travel western follows the journey of Christine Stewart and her fiancé Ethan on their quest to save everyone that they hold dear. However, there is something very unusual here. Instead of running to the hills like everyone else, they are running back in time. To the 1790’s, Alexandria, Colonial America.

What follows is a series of nail biting events detailing how this group of fifteen people, including two toddlers and three teenagers, make it to the 1970’s and survive there. The story is engaging right from the first chapter. I could not tell if I was pulled in the by intriguing plot or by the fascinating characters. I’m quite sure that author Christ Cooper-Burnett’s writing talent will make it easy for readers to be enthralled with both in this action packed historical fantasy.

The author wastes no time in introducing the crisis in the U.S. in the 2070’s, and why these people must escape their home. The author is able to create a compelling backstory along with the development of multiple characters and yet manages to strike the perfect balance between detail and keeping up the fast pace of the story.

While I enjoyed the story I felt that there some characters that I wanted to see even more developed as I found them interesting but didn’t get enough page time, along with a little fleshing out of some of the sub plots that are found throughout the story, because I found even these minor plots interesting.

Escaping Home: A Time Travel Historical Adventure is a gripping plot-driven science fiction story that tells an invigorating story and is guaranteed to entertain readers from start to finish.