What Fueled My Imagination

Into the Well is book two in your Warlock Chronicles series. What were some new ideas you wanted to introduce in this book that was different from book one?

In LADY SILVER, we saw the beginnings of romance between Bryanna and Bastion. Neither of them was at a point where they were ready to acknowledge their emotions but they were getting there. INTO THE WELL brings their relationship into full bloom. Each of them is forced to admit that they need each other — that they need other people in their lives. And they have to make the conscious choice of what direction they want their lives to take, knowing the consequences they’ll have to face for the choices they make. That’s something too many of us have forgotten these days, I think (myself included.) Bryanna has enormous power, for example. Yet she is just like everyone else: she makes her choices and lives with the consequences of her actions. That’s sort of an on-going undercurrent through the entire series.

Your characters continue to develop in this novel in new and interesting ways. What were some obstacles you felt were important to Bryanna’s character development in this book?

Bryanna is incredibly powerful, and I kept thinking of the saying, “Absolute power corrupts absolutely.” In more than one of my characters, we see that in full display. Because of the enormity of the magic Bryanna wields, I felt she had to be in a position to make the conscious choice to succumb to absolute power and all it entails, or walk away from it if that was the right, moral thing to do. Would she let the magic control her, or would she control the magic? She had to be willing to give up everything in order to become everything she could be. All in or all out — there’s no middle ground for her. I think more of us than are willing to admit it actually face a point like that in our own lives.

What were some sources that informed this novels development?

I don’t know that I can pinpoint one or two precise sources. It’s a culmination of my almost-65-years of life experiences and the influence of the books I read in my youth. Authors like Frank Herbert, Margaret Weiss and Tracey Hickman, Anne McCaffery, Jennifer Roberson, Larry Niven, Stephen King, Anne Rice, Terry Brooks, Kathleen Woodiwiss, to name a few. Don’t get me wrong, I enjoy today’s sci-fi and fantasy authors. But the “old school” authors were my bread and butter in my formative years. Throw in the original “Star Trek” series, “Lost in Space” series, “Twilight Zone” and the old serialized “Buck Rogers” and you get an idea of what fueled my imagination back in the day.

What can readers expect in book three of your Warlock Chronicles series?

There’s an empty throne that has to be filled. A civil war needs to be rectified. Chaos has a strong foothold in the galaxy and that always brings out the worst of man’s inhumanity to man. And there are past sins that must be accounted for. Bastion, Bryanna, and all of the characters face some difficult choices. New characters are introduced, others may come face-to-face with the end of their story arc. I’m in the same boat as my readers: I won’t know how it ends until I get to the final page! 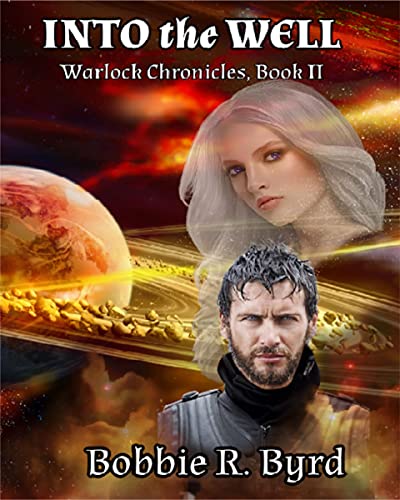 Bryanna is exceptional in many ways. There is no one whose powers can rival those she holds. When she is asked to force the Maelstrom into the Well, her hesitation is only fleeting. She knows what must be done. With her trusted confidant and life guide, T’Laan by her side, Bryanna does as she is asked. The Maelstrom’s presence in the Well marks presents a whole new dilemma for Bryanna. She is now the unknowing target of much interest and is about to be blamed for a death for which she is not responsible. This is one time when her abilities may cost her the ultimate price.

Into the Well: Warlock Chronicles, Book II, by Bobbie R. Byrd, picks up where Byrd’s first installment left off. Main character, Bryanna D’Isaac continues to be a force with which to be reckoned and commands readers’ attention from the first page. Although this book is the second in a series it still works fairly well as a stand alone novel, but reading the first book is quite helpful as the characters’ backstories are complicated ones. Readers who enjoyed Byrd’s first book will appreciate the character development in book two.

Byrd is a master of suspense and action. Book two in the Warlock series is certainly no exception. Cover to cover, main character, Bryanna, faces one incredibly challenging situation after another. Her exceptionalities are quite amazing and help keep the book’s pace brisk and engaging. She is one of the most unique characters I have read in a long time. The mixture of the ancients and futuristic elements works well and creates fascinating visuals for Byrd’s readers.

As strong of a main character as Bryanna is, I feel T’Laan and Glyndra make the story what it is. Their personalities are unique, and the dynamic they each have with Bryanna is both charming and provides readers with the perfect amount of humor. I found myself looking forward to their scenes as much or more than I did the action sequences.

Readers looking for a new science fiction series will find themselves taken with Bryanna D’Isaac and Devon Bastion and their adventures. Having read book one in Byrd’s series, it was most definitely interesting to see the ever-evolving dynamic between Bryanna and Devon continue into book two. I highly recommend Into the Well: Warlock Chronicles, Book II to any science fiction fan looking to break into an exciting new series.