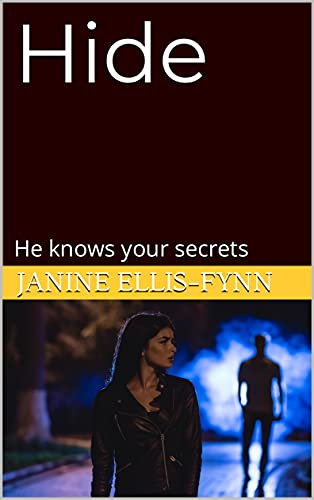 Charlotte knew there would be trouble for her, and probably her friends as well, as soon as she got the news that her husband had woken up from his coma. Even on the best of days, Patrick could be moody, volatile, unfriendly, and at times downright violent. When provoked, his unpredictability escalated.  As each of the women began to receive bizarre gifts that referenced traumas in their pasts, they knew Patrick had to be responsible somehow and wondered collectively what he might actually be capable of. Turns out, there was plenty about him that even his wife didn’t know, but one woman was closer to the truth than she even realized.

Hide by Janine Ellis-Fynn covers a lot of ground on subjects as varied as abuse, trauma, revenge, and friendship. As cowed as Charlotte is by her abusive husband, she is equally emboldened by the group of friends made over the course of the past year. Despite each of them dealing with their own trials and traumas, loss and life changing events, they all have stood up for each other in ways they never could have imagined even doing for themselves. Patrick, on the other hand, is a product of his childhood, a time filled with endless days of abuse at the hands of those that should have fought to protect him. As a result, he is detached, not to mention a psychopath by clinical definition. Everything about the story sets the framework for a tense and engaging thriller.

While the themes of friendship and faith try to rise to prominence in this emotionally charged story, I would have enjoyed more easy flowing an organic dialogue to really bring the characters out and make them engaging.

Hide is a very interesting story. I honestly could not put it down because I kept waiting for the climax. It really did have all the foundations of a great thriller, and I wanted to dive deeper into the characters and explore the central idea of this novel a little more in depth. If you are a fan of melodramatic thrillers, then you will enjoy this intriguing story.

Your characters were all well developed and interesting. Who was your favorite character to write for?

My favourite character was Diane as I can identify most with her having suffered some of the same traumatic events in my own life.

What were some themes you felt were important to capture in this story?

I wanted to write a book that many women from all walks of life could identify with. I have suffered much trauma and tragedy in my life so each character I have developed is modelled on my own experiences.

My next book is called ‘When the Sparrow Weeps’ and will be available towards the end of 2021.