The Destiny Of All Dogs

The Destiny of the Wolves follows a pack of wolves that set out on a dangerous quest seeking answers to a vision that shows a bond between man and wolf. What was the inspiration for the setup to your story?

My family and I, who always rescue animals from the streets, realize the connection that animals create with us, this loving and dependent bond. It is very visible how abused dogs walk and those who live without an owner, the way they look at you, the way they react to the approach of other dogs or people. Dogs exist today because our species has domesticated the wolf many times over the millennia, and I often say that the existence of dogs is a human responsibility. The species Canis familiaris was not made alone, the human being had a direct participation in its creation. When I see an abandoned dog I know it was because someone abandoned him and not because he was born in the wild. That was the reason I wrote The Destiny of the Wolves, because I wanted people to reflect on what it’s like to be in their “shoes”, which is the same as abandoning a child in the world, without food, without protection, awakening fears and traumas in these animals that is similar to what a human being might feel.

The characters in the story were intriguing and well developed. What were some driving ideals behind your character’s development?

My intention when creating the characters was to bring wolves with behaviors that could resemble our dogs. Every wolf in my story is or was a dog I adopted. Its colors, ways of acting and thinking were inspired by the characteristics of my dogs. Even Finn and Felicity are my dogs and the story about them in the book is true. I found Finn half dead when I was at a bus stop and Felicity was my sister who found her, trapped in a lamppost and in the rain, freezing to death. Our dogs have a lot of personality, and even though they’re nearly 18,000 years younger than their ancestors, dogs still act with some instinctive wolf´s method.

Raising awareness about animal abandonment, our responsibility for the species Canis familiaris, awakening in the reader empathy for dogs and other animals, a reflection on them not having chosen the fate they have, but that we who choose the destiny of all dogs.

The next book to be published in English is Symbiosa and the Threat in the Arctic, which will tell the story of a young girl called Emma. She is saved from near-death by her friendship with a falcon. Her normal life resumes, but she is left with the sharpened eyesight of a bird of prey. Summoned to a mysterious winter holiday camp in the far north of Norway, Emma has the chance to strengthen her connection with her falcon and truly understand the secret union of the Symbiosa, the Sami people’s solution to all human ailments. But what Emma wasn’t counting on was a sinister underground organisation threatening the very existence of the Symbiosa. Soon she is faced with a terrible doubt: do the Symbiosa represent salvation or rather a terrible curse?

The Destiny of the Wolves 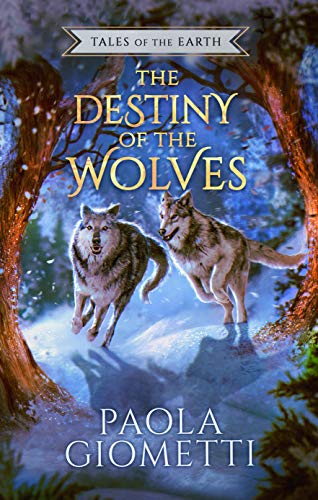 A gripping tale of loyalty, companionship, love and survival, this story begins with a great grandfather recounting the legend of wolves that has been passed down through the generations, to his great grandson on his sixteenth birthday. It traces the journey of a young alpha named Kushi, as she explores the dangerous snow mountains leading her pack to their destiny, following her ancestors’ advice that she had witnessed during one of her visions.

Author Paola Giometti has written a captivating children’s book about the domestication of wolves. Told through engaging narration the story reflects on the evolution of wolves into dogs, and does so with a unique voice and stirring characters.

This adventurous story is set against the backdrop of the northern lights and treacherous snowy mountains that provide an exotic and alluring backdrop to this thought-provoking fantasy. Readers are also introduced to other wonderful creatures like the golden eagle and the majestic moose, along with the small pack of wolves that are struggling to survive. This enchanting combination ensure this is a story that is unforgettable.

The story portrays wolves in an accurate way, showing their animalistic and predatory side, which helps to establish authenticity in the story. When the wolves attack the peaceful villagers, they behave like savage animals and it is up to Kushi’s family, Finn and Felicity to take a stance and fight for the safety of the defenseless. This showcases strong morals that any child will be able to understand. After experiencing their love and care firsthand, Kushi realizes the importance of the relationship between humans and wolves. It marks the first step in building trust and creating a bond that her descendants would further strengthen. I loved watching this dramatic evolution.

The Destiny of the Wolves is an easy story to follow, which is great for young readers, but it still provides stirring and thrilling moments that create an impactful story that will stick with readers for a long time.