I Felt Their Every Emotion

Push Me Off The Cliff tells the emotional story of two individuals’ who desire to fight the Germans and defend their homelands during World War II. What was the initial idea behind this story and how did that transform as you were writing the novel?

All my books are dedicated to ordinary Soviet people, their difficult life and everyday struggles. As always, the initial idea was to tell western readers something about my country and my people that would defy stereotypes and through telling my characters’ individual stories showing their best and worst sides.

Your characters often go on a deeply emotional and transformative journey in your novels. Is this intentional or incidental to the story you want to tell?

I don’t think a story that shows no deep emotions and transformative journey of its characters would touch readers. Incidentally or not, I felt their every emotion, every hurt and injustice, disappointment and excitement, thankfulness and compassion. As it was with all my other stories, I couldn’t sleep peacefully when they suffered (on the page) and I cried happy tears – for them and for my decision to grant them life and happiness – at the end of the story.

You grew up in a military family in East Germany. How has that affected your writing?

If one is born in a military family, there must be some influence. The atmosphere itself is different if your father dons his uniform every day and goes to a place you are not allowed to visit and is doing things he doesn’t talk about. It added mystery and many unanswered questions to my life. Yet there was always that feeling that my father did something important for the country, for our people, so we lived a peaceful life, although as far as I know, he didn’t participate in any military conflicts. When I started writing about WWII, my father became a person who I could ask “military” questions, including about his older brothers who took part (and one of them perished) in the war. His influence on me was and still is priceless.

What do you hope readers take away from your novel?

I hope readers of my novel will learn something new about the Soviet Union’s fight against fascism and our people who paid an unprecedented price for defeating Nazi Germany. I hope that the story of Maria and Armen, who were a part of that struggle, and who found how unmerciful life can be for ordinary people even after the war ended, will move my readers.

Push Me Off The Cliff 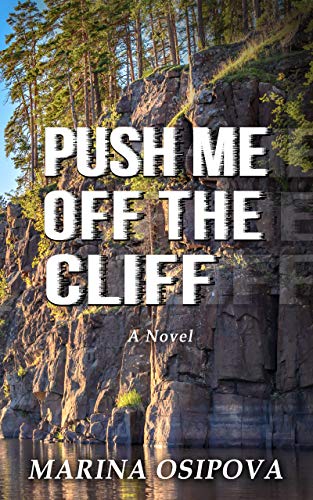 Push Me Off The Cliff by Marina Osipova tells the story of two individuals’ who desire to fight the Germans and defend their homelands during World War II. We are introduced to Maria and Armen at different times and places in their lives, following them until they cross paths and their two stories become intertwined.

Straight away we start with the use of a reflection to convey Maria’s appearance to the reader, providing very descriptive attributions in dialogue. The writing is unusual, requiring some adjustment before I was fully immersed into the story.

The story itself is very enjoyable. Osipova employs vivid imagery throughout the story, and in some cases uses this to illustrate the horrors of war in great detail. Author Marina Osipova is a great storyteller and I remained captivated throughout this riveting historical fiction novel.

We switch back and forth between Maria and Armen’s perspectives, though Armen’s seems more dominant and more developed. Osipova worked to give the reader a great deal of pity and sympathy for Armen, creating a deeper reader bond with his character. Both characters boast a rich backstory that adds to the depth of their characters and helps the reader more easily relate to them and their struggles. Most endearing is the gradual build up to the understanding they come to share between one another; it isn’t instant or easy for them and it makes their eventual bond that much stronger seeing the journeys they have both taken from the beginning of the book until the end.

I enjoyed the foreign perspective to the war and getting a glimpse of what life in Russia and the surrounding areas were like. As an American, this is perhaps a less often explored side of World War history and presenting it in fictional form makes the subject matter entertaining, exotic, and slightly less weighty than it was in reality.

Push Me Off The Cliff conveys an engaging and emotional story, particularly in the second half of the book, that kept me hooked and invested in the lives of enchanting characters that are colored by the horrors of war. Their impassioned journey and personal evolution is well worth the read.