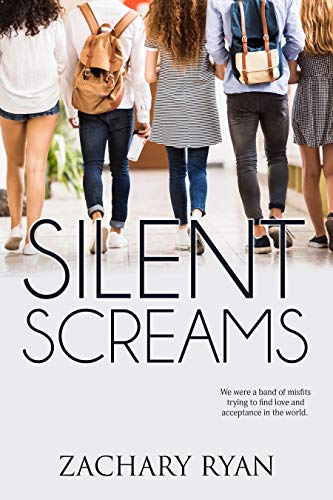 Silent Screams by Zachary Ryan follows the lives of four high school friends forced to grow up due to a school shooting. Lane struggles with whether or not to come out to his friends while mourning the loss of his lover. Cass struggles to find someone to save her from her home life. Zachary deals with losing what she thinks makes her special. Ben finds his life of luxury torn away and struggles to figure out who he is without it. Being friends with the shooter, these four students battle with their own demons while attempting to cope with the guilt and responsibility they feel for their friend’s actions.

The raw emotion and authenticity of the characters is something that is outstanding in this book. I applaud Zachary Ryan for creating such imperfect characters that are so relatable. Each character deals with something different and grieves in a unique way. Each character, even background ones, go through so much character development and really grow up and learn how to trust and depend on each other. We get to see through each character’s eyes through point of view changes that happen each chapter. It’s refreshing in a way because you get to see into the heart of each of the four main characters and see their innermost secrets and insecurities. Silent Screams is a story about friendship, love, insecurities, trust, and the dangers of keeping secrets in for too long.

I enjoyed this book, but there were some times I had to reread a line because of a typo. There was also one background character who’s name was inconsistent, being Violet in some places and Valerie in others. However, this book is still thoroughly enjoyable.

Silent Screams was a roller-coaster of emotions from beginning to end. I am not ashamed to admit I cried a couple of times. This is the sort of book you pick up and can’t set down until you finished it. I’m not sure that I would class this as a feel good story but it ultimately leaves you feeling satisfied and rejuvenated.