She Is An Avatar Of Fire

Sea of Shadows is book two in the Strands of Existence epic fantasy series. What were some new ideas you wanted to introduce in this book that were different from book one?

Well, the whole book is different in tone from the first because it largely deals with the war in the city and not so much Istrae’s personal past and current journey. It also shows more of what the consecrators (the magic casters) are capable of doing in regard to pure power and gives some implication on what fuels their magic. I also wanted to open up the smaller story line that will explore Rime’s affliction down the road and show a softer, more caring side of Riestel.

Istrae continues to be an interesting character. What were some challenges you felt were important to developing her character in this book?

I wanted to show both acts of selfishness and kindness because she isn’t a “good” character nor is she an “evil” one. In the stagnant world, she is an avatar of fire (change) so whatever she gets involved in will eventually cause rippless in the world that will result in the destruction of something. She has to be selfish enough to sometimes do bad things on a whim and kind enough to do good things when she considers her options. Also, at the beginning of the book, I wanted to show that finding out that she is in fact a construct, a homunculus of sorts, more than a real human sort of paralyzed her in an existential crisis / depression which I suppose is a bit of a sour note to start the book on but I felt it was only right to show how deeply it affected her and to illustrate with it that she can carry heavy burdens and not break. She may feel down, angry, dissappointed and even detached from the world but she will eventually find that something to keep her going forward.

To try and make the fight scenes somewhat realistic even with the magic. I, personally, dislike when everything is just “smash and go” in battles and war so I wanted to make the characters use a wide repertoire of things to solve issues: threats, intimidation, bribery, pincer attacks, flanks, decoys etc. So even though there are some straight forward battles, there is usually some description of tactic too when Rime or his guard is around.

What can readers expect in book three of your Strands of Existence series?

A return to the style and feel of the first book, though the tone will stay considerably darker. One very significant detail from book one will come into play. It’s something I suspect not many will have paid much attention to, so I’m looking forward to hearing some of the reactions from beta readers once I get that far. The third book will reveal more on the actual three-fold structure of the world (light world, “real” world, heavy world and the pocket planes in between). The next book will also further increase and deepen Riestel’s (Istrae’s counter force) part as Istrae will try to help him recover his daughter (or what’s left of her). There will also be scenes where Rime and Riestel interact a bit more which I think is fun dynamic to bring out as they deeply dislike each other but also very much respect each other. Also, a new race (the arochs) will be introduced in the later chapters to set up some things in the fourth and last book. 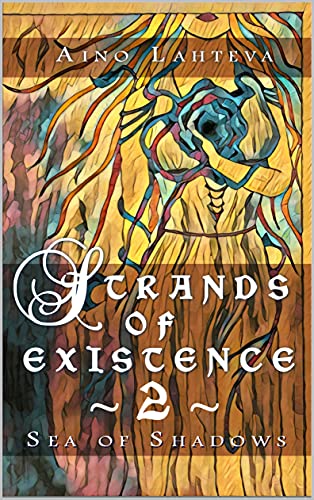 Strands of Existence 2: Sea of Shadows by Aino Lahteva follows Istrae, a woman who is a reincarnation of a women who set out to change herself in order to rule properly. Istrae knows some of the past but there is still much more to learn as she figures out who she is in the middle of a war. Sea of Shadows is the second book in the Strands of Existence series and is a unique epic fantasy story that I thoroughly enjoyed.

Sea of Shadows is a slow burn type of story, or at least it felt like that to me because it took be a bit to get into, I think because the novel feels different from book one in the Strands of Existence series. Istrae continues to be our main character, and continues to be as compelling and fun to follow as before. I was intrigued by Istrae, at least after she stopped being so apathetic about everything. It is hard to cheer for someone who just does not care, but I think that is the point here and it is executed so well that it had me bubbling, and few books do that.

The city is split into districts, and they are big, and it was interesting to see how war affected them. The world continues to develop in this story and I really enjoyed the detailed world being built in this series.

While I’m not a 100% sure how the magic system works, it is unique and captivating, but still has enough familiarity that I can follow along and get behind it. I loved how grounded it felt, taking this out of the realm of fairy tale fantasy and making it feel much more authentic, or at least as authentic as ‘magic’ can get.

I was intrigued by how the action played out in the fight for the city and was rooting for Istrae and her side. I was disappointed that the book ended where it did. But that is only because I want to see what happens next and how Istrae is going to fix the world.

Strands of Existence 2: Sea of Shadows has unique magic and city districts that make this epic sword and sorcery fantasy story feel distinct and interesting. I highly recommend reading book one in the series first, as there is a lot of great story you will be missing if you don’t.