The Elusive Smuggler follows two people determined not to give into one another while a diabolical enemy plots revenge. What was the inspiration for the setup to your story?

Well, of course, the story line is nothing new, but what is under the sun?! Anyone who loves swashbuckling heroes full of ‘je ne sais quoi’, feisty heroines and evil villains, and a good romance never runs smooth or it’s boring, will tell you that! However, to delve a bit deeper…outward appearances can be very deceptive, and people’s characters in reality are often very different from the face they put on to the world. Also, a lot of people have events in their past that have made them what they are… either one wrong decision has changed the direction of their life, or the way they were brought up has coloured their personality, ambitions and view of life and, sometimes, the opposite sex. Those themes figure a lot in all my stories, historical and contemporary.

In addition, I suppose that particular period of history has always fascinated me. Enormous social upheaval – radical in France – and the repercussions it had across Europe as new discoveries and inventions went hand in hand with radical thought. I just looked at it all, especially the anarchic situation in France, and it was just perfect as background for someone clever, unscrupulous and brutal to take advantage for personal gain, knowing there was little in the way of law and order to pay much attention and interfere. As for the hero and heroine in The Elusive Smuggler… they were influenced by their pasts in different ways, and their families, and when you have two very strong willed, determined and passionate people, sparks will inevitably fly.

No one is perfect, we all have our faults… but being able to see one’s failings and try to improve them, is a challenge, and not everyone succeeds… as is the ability to admit one is wrong and apologise. Just because someone is headstrong, brave and determined doesn’t mean to say they can’t be humble too. I just think people with complex personalities are so much more interesting. It allows them to make mistakes, take wrong decisions, and that creates twists and turns in the storylines.

To be perfectly honest, I never really set out to have any theme or ideas for characters when I first started writing, nor a plotline. It all just evolved the more I wrote and got involved in each story, and I chose this period of history as it was familiar to me so I didn’t have to do too much research. Given I started writing on a long daily train commute to work and home again, that was quite important! However, as I wrote I always thought about what I would do, or feel, or how I would react if I was in that situation, if I was that character. And I wanted characters with depth, who would make mistakes, but come through adversity somehow, rising to the challenge. Not only that, I wanted other interesting characters threading through each story other than the hero and heroine and the villain, so there were more side plotlines and other people involved in them, to give the whole tale more breadth and interest. I always enjoyed reading stories like that in my youth and loved escaping into them, keeping me engrossed for days, unable to tear myself away I was so involved in the story, full of suspense and impassioned romance… and that’s what I wanted to reproduce when I started writing. Most of us secretly yearn to be something we’re not in some ways… slimmer, fitter, better looking, cleverer or more accomplished at something… fantasy is a great escape from the dreariness or struggle with everyday life and we all do it one way or another at some point. So my stories are simply escapism for romantics!

The Elusive Smuggler is only the first part of the whole story of Francis and Cat – Behind The Shadow.

The remaining three parts of Behind The Shadow are available now. 2: An Unusual Courtship, 3: The Determined Duchess, 4: The Dangerous Harlot. They’re full of drama, suspense and plot twists until all the threads of the tale finally resolve themselves in part 4.

Then, there is the 5 part sequel, Pride of Lions, set some twenty years later during the latter part of the Napoleonic Wars in Europe. Its central character is someone who appears in Behind The Shadow (part 2 onwards) an aristocratic French refugee who has grown up in England and is now an undercover agent working for the Duke of Wellington in his campaign against Napoleon…. a sort of James Bond in every way… except he hasn’t got an Aston Martin, just a black horse called Shadow (of course!) The action moves from London to Spain and to France, and includes action at the epic Battle of Waterloo, and finally a thrilling climax with another crazed villain. And a lot of the characters from the first book reappear in this sequel so you get to find out what has happened in their lives… and The Shadow has his final hurrah. It’s all compelling and engrossing stuff!

Pride of Lions, parts 1 and 2 are due to be published at the beginning of November with the remainder in December and January.

Compelling romance and swashbuckling thrills. The dramatic and gripping story of one man with two lives and the woman he craves, but cannot have. He was the handsome aristocrat and charismatic adventurer who created a dynasty and she was the feisty, unconventional woman he loved. He was English and she was French, two strong-willed people determined never to give in to each other, and a devious, diabolical enemy determined to exact revenge on the smuggler who had constantly evaded him and thwarted his nefarious plans.
Set at the end of the 18th century when France was on the cusp of a bloodthirsty Revolution, this is an exciting and unputdownable tale of daring escapes, broken promises, distrust and misunderstandings, all threaded through by a passionate and turbulent love affair, a scorching romance that wouldn’t be denied.
Part One: The Elusive SmugglerFrance 1790. A country in turmoil and you’re desperate. Your family has been unjustly thrown into a fortress prison for reasons nothing to do with the Revolution and it’s down to you to rescue them, if you can, before they meet a grim fate. So what to do when you only have a crippled brother to aid you? With law and order breaking down and justice gone missing, you decide only someone with a ruthless reputation can help, a devious and cunning criminal, if you can find the man you’ve heard about. The brutal and corrupt Regional Governor has been trying for years without success, but that won’t discourage you because you’re an exceedingly determined woman, wilful and somewhat eccentric, and you’ll pay or do anything if this man can help facilitate an escape from the fortress and get your family out of France.
Marie-Catherine de Mornay had always got her way and done what she wanted, and succeeded, but that was before she met The Shadow. However, Edgar Bernheim, the venal Governor, had his own private agenda, for which the Revolution was merely a front, and was an exceedingly vengeful man people took on at their peril… 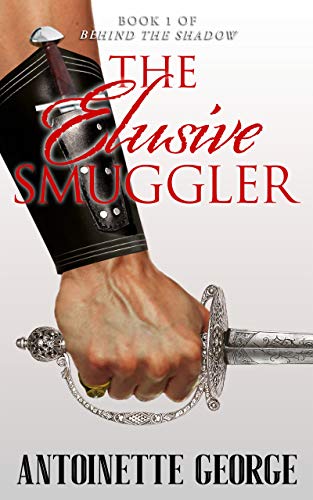 The Elusive Smuggler (Behind The Shadow, #1), by Antoinette George, tells the story of a handsome rake, known as The Shadow. The Shadow is a successful smuggler and the only hope Marie-Catherine and Edouard de Mornay, sister and brother, have of rescuing their parents and restoring the family. But first, they’ll have to track him down and convince him to help them. This search takes the siblings to meet Carlotta, a dancer who sometimes lives and travels with the Romani, but has her own story and her own dreams.

This riveting historical novel is set in the late 1700’s, mostly in France near the coast, but with connections across the channel in England, too. The French Revolution is brewing, with dangerous implications for everyone, from the titled upper-class down to poor workers caught up in the wrong place, and Antoinette George is able to capture it all with fine details that transports readers to the era.

The author’s research shows in the descriptions without slowing down the action. Since most people at this time would be conscious of social class and birth, our characters are constantly aware when someone they meet has well-educated speech or a cultured accent.  Of course, that doesn’t mean that all the ladies in The Elusive Smuggler are ladylike, or that all the travelers are of low birth…

These four characters are well developed, complete with their own flaws, making them feel authentic and grounded. The dialogue is always lively, with constant cheerful banter between the friends, and constant arguing between a certain couple. Our protagonists will need to apply fast actions, clever thinking and cooperation to accomplish their goals. But with political unrest and corruption around them, it’s very hard to know who is trustworthy, and this instills a consistently high level of intrigue throughout the novel.

Fans of thrilling historical romance and stories of enemies-to-lovers will just eat this one up. The end of the novel makes it clear that the story of The Shadow, as well as Cat, Eddie, and Carlotta, is far from over, and there are three more novels planned in Antoinette George’s dramatic historical romance series Behind the Shadow.