So, where does truth end and fiction begin?

The Hainan Conflict is a superb follow-up to book one in your The Net thriller series. What were some new ideas you wanted to introduce in this book that were different from book one?

There were several ideas that I wanted to include in The Hainan Conflict. Interestingly, they were all based on elements of truth. The very first chapter hits on one of those elements: A female Russian virologist developing biological weapons and selling them to various countries and/or terrorist groups, along with the deliberate release of a deadly strain of smallpox in Kazakhstan in order to test its potency.

The next factual element I wanted to include was the mid-air collision between a US spy plane and a Chinese fighter jet in airspace over the South China Sea, resulting in the US spy plane’s forced landing on Communist China’s Hainan Island. This actually occurred on April 1, 2001, and set into motion a highly charged political situation of top-secret US intelligence possibly getting into China’s hands. A lot of research went into the characteristics of the planes involved, the base where the US plane had originated from, etc. to make the story as believable as possible. My husband and I were living in Southern China at the time (we had even vacationed on Hainan Island) and we were (naively) surprised at how different the news accounts were between US and China sources. It was at that point that I realized that having a free press doesn’t guarantee the truth any more than a government-controlled press. I think that is something we as Americans take for granted, and wrongly assume that our news isn’t editorialized.

The next factual element was Hainan Island itself. It is just as beautiful as described in the book. And, here again, truth proved stranger than fiction! The descriptions of the resort/beach area, Wild Boar Island, the unusual military training camp on the beach, the primitive village with female leaders bearing facial tattoos, the hidden caves, even the modern computer in a plastic tent, were all facts based on personal experiences there. And, the island’s history of a native women’s group defeating the government’s army is factual. A dear Chinese friend was kind enough to research that information for me.

So, where does truth end and fiction begin? I leave that for the reader to figure out.

The relationship between Yi and Sarah was consistently intriguing. What were some ideas that informed their conflict?

The characters of Yi and Sarah are composites of the best qualities in some of the friends and judges we knew in China. Such qualities included a fierce loyalty to family and country, and a dedication to seeing China rid itself of poverty and corruption. However, some of the characteristics of the average Chinese man were not so charming. These included excessive smoking, spitting, and a tendency to treat women as second-class citizens. It was not uncommon to see a man step in front of a woman in line–simply because she was female. (This infuriated me, and I tapped a few men on the shoulder to point out their error!) The conflict between Yi and Sarah certainly comes from the issue of his being American and a spy (and therefore unable to confide in Sarah his true identity and purpose). Adding to the conflict and intrigue, Yi’s character had to be different from the average Chinese male. So, he regularly does things more typical of an American. This confuses Sarah. The fact that he’s an attorney by profession rather than a spy gets him into trouble on several occasions. Plus, he misses his life in America. Much of Yi’s conflict stems from Sarah’s life in Tibet with Buddhist/vegetarian traditions being so different from his Christian American ones. Yet he is fascinated by her beauty, her brilliant legal mind, and her strong female personality. He struggles with the distraction of falling in love, while being in an uncomfortable situation that could cost him his life.

What were some goals you set for yourself as a writer in this book?

The main goal was to be true to the facts. I researched and tweaked the story until I could fit it into the timeline that the facts dictated. That was not easy!

What can readers expect in book three of The Net thriller series?

Although book 2–The Hainan Conflict–is more standalone than book 1 (which was written as an introduction to the series, its intertwining stories and character development), book 3–The Panama Contagion–continues the story of the Net organization’s attempts to secure world power, the vendettas between the evil characters and our hero Yi, and the romantic struggles between Yi and Sarah. As readers of book 2 know, the Net acquired bioweapons from a Russian virologist. The use of these weapons culminates in book 3 by way of unsuspecting travelers on two cruise ships returning to the States after a trip through the Panama Canal. A pandemic ensues. Also carried over from book 2 is the Net’s plan to disrupt international shipping channels by destroying parts of the Panama Canal. The question is, can Yi stop the Net’s destruction while fighting off a psychopathic killer, and trying to mend his relationship with Sarah, all while the CIA is ignoring his warnings? You’ll have to read it to find out. 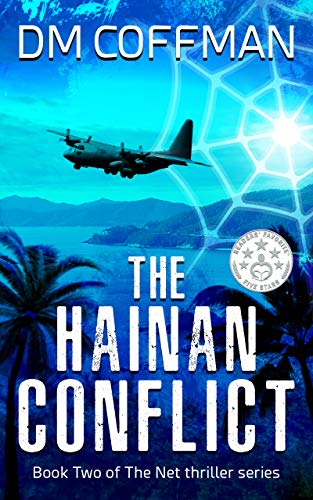