The Panama Contagion follows an attorney who must stop an international terrorist organization from killing people. What was the inspiration for the setup to this thrilling story?

Many strange experiences occurred while my husband and I worked in China with Chinese university students and judges. When China received upgraded trade status with the World Trade Organization (WTO), the United States helped with training China’s judges to learn and implement the WTO’s legal requirements including the Rule of Law. One reason why the US did this was because American companies doing business in China were losing millions of dollars from counterfeit products–they were competing against poor-quality knock-offs of their own products. My husband and I were teachers in that judicial training program, working with China’s judges–some as high as their Supreme Court. From my being hospitalized with early SARS (when China was still covering it up), to a mysterious news editor who appeared at our door professing a terrorist group in Southern China targeting Americans, to touring a primitive island village and finding a modern computer inside a plastic tent on an island filled with hidden caves, to hearing the judges complain about the corruption in their judicial system and how hard it was going to be to implement the Rule of Law, it didn’t take much imagination to create The Net thriller series.

Jason Yi is an intriguing and well developed character. What were some driving ideals behind his character development?

When the US stepped in to assist China in implementing the Rule of Law,one major barrier to overcome was the existing customs and practices in China. For example, legal decisions weren’t always based on the law–some were determined by who paid the most money to the judge or who had the best family connections, etc. This was deeply ingrained in Chinese culture. Yet the Rule of Law requires that the written laws be followed,interpreted uniformly, and that no one is above the law. The WTO and the US could send in teachers to train the judges, but only by changing the culture and eliminating the corruption could the Rule of Law really be implemented. Of course, it was purely my imagination but I accomplished this in the story by sending in a few undercover Chinese-American attorneys to serve as judges, ferret out corruption, and sway other judges to follow the Rule of Law. Jason Yi is one of those undercover Chinese American attorneys. How he becomes involved is introduced in book 1–The Net Conspiracy. As for ideals behind his character development, there were several: Judges in China are young–some right out of college. The average age is 35. So, Yi would have to be about that age, fluent in the language sand in Chinese and American law, be honorable and trustworthy, and have a sense of adventure in taking on the risk of undercover work. And it never hurts that the protagonist is handsome!

I enjoyed the mystery at the heart of this story. Was this planned before writing or did it develop organically while writing?

I outline when I write and know pretty much where I want a story to go.However, as I wrote The Panama Contagion, the story moved in its own direction–much different than I had planned and it surprised me. I thought the story would be heavy into the virus and the resulting impact on society. Instead, it played out more about the interaction between the characters and their personalities. The Foreigner (bad guy)took on a much more psychotic nature, and a secondary character (Bao) became more involved than I had originally planned. As it turned out,this made for a better ending and segue into book 4, The Harbin Connection.

This is book three in The Net series. What can readers expect in book four?

The terrorist element of The Net organization has pretty much been thwarted, but the vendetta between the Foreigner and Yi (evil and good)will peak in book 4–The Harbin Connection. Where The Panama Contagion dealt with a deadly virus, The Harbin Connection will deal with human sex trafficking. (If you remember in book 3, Bao owned numerous massage/sex parlors that specialized in Caucasian children–acquired through kidnapping and sold off when no longer useful; sold and lost into other markets through the arctic city of Harbin, China.) Bao and Sarah (Yi’s love interest) will play strong roles as The Net targets Sarah to be kidnapped and sold at Harbin. Other evil ploys will prevent Yi’s ability to save her, and her survival will come into question. Yi’s honor and belief in the Rule of Law will be challenged as he comes face-to-face with taking the life of the man he despises. As with the other books in The Net series, book 4 will be filled with international intrigue, suspense, and fast-paced action adventure, without the use of offensive language, graphic sex or extreme violence. 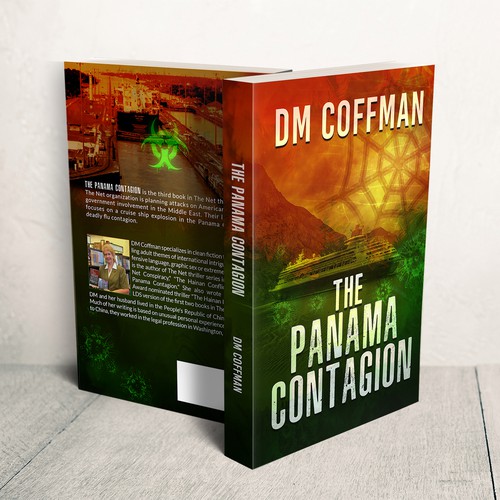