← Derailed
The Six and the Crystals if Ialana → 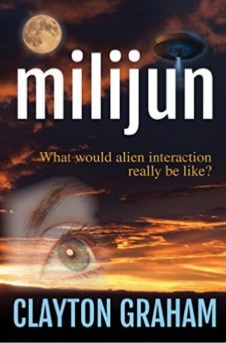 On a distant moon, a miner stumbles upon an apparent catacomb of an alien species, but when one is brought to the surface for study, it sparks a strange and violent invasion as the species wakes and makes their way to Earth. While on vacation in southern Australia, Laura and Jason Sinclair are the first to view the aliens’ arrival, but while trying to put the strange sighting behind them, their vacation turns into a nightmare as Jason’s sudden abduction and physical interaction with the aliens sparks a journey across the desert in search of answers. As the mother and son are pursued by law enforcement, military personnel, and the otherworldly beings, they’ll have to discover who is friend and who is foe in a world where any human may harbor an alien within.

Graham’s book Milijun is, at its core, the story of a mother trying to keep safe a son who is increasingly thrown in danger, first by others, but later at his own behest and for noble intentions. Her panicked determination and fierce protection of her teenage son are entirely relatable and hold the emotional center of the book. Around that, the sci-fi plot swirls, much like the pressurized vortex the aliens create, occasionally landing in moments of sincere character development, but otherwise surrounding the reader in the universe Graham has created. Modern technologies are newly interpreted in this year of 2179 AD, with fantastical ideas like phasing, instantaneous teleporting, and corporeal possession given plausible, scientific grounding. As with many sci-fi works, the focus is the world, the background against which the plot occurs. The expanse of space and the futuristic Australia are both described in wonderful detail, revealing great personal knowledge with both environments. The humanity and motives of every character is questioned, both for their personal interests in the new alien species and the possibility they are being possessed by that invading species. There are themes throughout of motherhood, the moral stakes in scientific exploration, the nature of the afterlife, and the existence of souls – all used to great effect.

Beyond Laura’s motivation to keep her son safe, however, the other interactions between the human characters seems plot-driven, as opposed to true connection. However, because of this, the reveals and surprises in the final third are true surprises, but I wish I could have been let in on the secret with half-hidden hints about our character’s motivations throughout the first two-thirds. As it stands, people seem to realize they’re being deceived or supported because of sudden gut intuition, not conveyed from the character but from the plot’s necessity.

One of the character devices that stuck out the most was the supposed romances – I say supposed because they either come out of nowhere, or aren’t supported by the involved character’s actions. They don’t interfere with the basic story, but they don’t add much either, many because they are unbelievable, or they aren’t necessary to the story’s development. These romantic pairings are supposed to make us feel more for the characters, but if they had been executed as well as the mother-son relationship, I would have cared more about the outcome, instead of seen them as odd personality traits thrown out to garner affection for one particular character.

In the end, these character flaws didn’t keep me from enjoying the story presented, and the eventual abolishment of the classic “good vs. evil” dichotomy was greatly welcomed, as well as that character’s choices, whether right or wrong in the end, did have consequences. The ending, which was oddly ambiguous in its instantaneous, unexpected nature, nevertheless intrigues me, especially with many plot threads still left open-ended, and I’m excited to see where the surviving characters go in subsequent works.

← Derailed
The Six and the Crystals if Ialana →