← Ideas of Dreams and Mist
An Equally Ferocious Misery →

A Friend We Later Regretted

Mervyn vs. Dennis is one of the funnest books I’ve read this year. Mervyn struggles with keeping his strange and intrusive boss out of his personal life. What was the inspiration for the relationship between Mervyn and Dennis?

Most of us have made a friend that we later regretted. I wanted to take that idea to its furthest extreme. Likewise, unless you’ve never worked or been extremely lucky, you’ve probably had a boss who made your life a living hell. Both of these situations are familiar comedy tropes but I wanted to combine them into something fresh. In both personality and outlook, Mervyn and Dennis couldn’t be more different. Mervyn is liberal and open-minded whereas Dennis is bigoted and mean-spirited. I wanted to explore whether two such disparate men could ever reconcile their differences or if they’d clash until the bitter end. During the writing process, this was something I was careful not to over-plan. I had some ideas of how their relationship would end up but I wanted it to evolve organically just like a real friendship or enmity.

What I liked about this story is that Mervyn is just trying to make it through life like many people. When you were building Mervyn’s character and background what was one thing you hoped came through in the end?

I wanted Mervyn to be likable, despite his flaws. Mervyn is extremely skilled at getting himself into embarrassing situations but I always wanted the reader to be on his side. Although he has moments of irrationality, I was careful to make his actions believable. Whether he makes the right choices is up to the reader but I wanted those choices to make sense, no matter how poor they might be. Mervyn has roots in picaresque fiction, British comic literature and modern sitcoms. He’s slightly too unhinged to be an everyman character but hopefully he’s relatable enough for the reader to become invested in his story. Comic novels, by their nature, tend to have eccentric characters. Sometimes this results in shallow personalities and caricatures but I wanted all the characters in my book to have believability and depth, especially Mervyn himself.

When Mervyn firsts meets Dennis he pretends to be racist so they can connect. Why did you choose that as the catalyst that propels their relationship?

Mervyn pretending to be racist is set up as a joke but nearly every event in the story is caused by that initial lie. Dennis is emboldened by Mervyn’s faux racism, showing how even a careless racist joke can cause a butterfly effect. Likewise, when Mervyn brings a swastika mug to work in an attempt to shock, it inspires Dennis to do something even more extreme. Although the novel is primarily a comedy, I wanted to explore the causes and consequences of prejudice. Alongside this, however, I was careful to avoid having a didactic message. It’s fairly common knowledge that racism sucks. People do need reminding sometimes but they don’t need it spelled out. What interested me most were the roots of Dennis’s hatred and the depths of his denial. In the wake of Brexit in the UK and the shadow of Trump in the US, racism is unfortunately topical right now, and there’s never been a more crucial time, in my life at least, to take a stand against it.

I’m currently rewriting three of my earlier novels. First off, there’s Grand Theft Octo, another comedy. It’s more satirical than Mervyn vs. Dennis, with less overt social commentary. It’s the story of Jonathan Doe, an entrepreneur of businesses the world has never seen including freelance taxidermy and (you better believe it) octopus teasing. Originally a 140,000 word epic, I’m on target to trim it by at least half. Next up, there’s The Papyrus Empire and its sequel The Black King. They’re dark thrillers that kick off a series about a global secret society. I’m hoping to have Grand Theft Octo ready in the next few months with The Papyrus Empire to follow. To keep up to date, please join my mailing list. 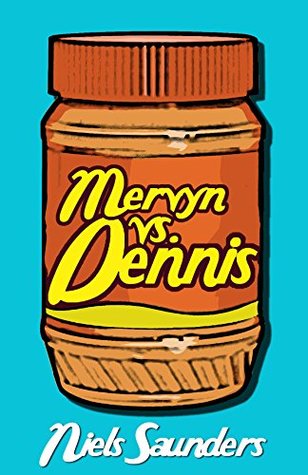 Deep in debt, Mervyn Kirby gets a job he doesn’t want by pretending to be racist. His new boss Dennis Lane thinks he’s found a kindred spirit. When Mervyn confesses he’s not really racist, Dennis thinks it’s just part of the act. Day by day, to Mervyn’s horror, Dennis worms his way into Mervyn’s private life. Despite his fears, Mervyn is torn: his new job pays well but he despises Dennis and everything he stands for. How far will Mervyn go to free himself? How far will Dennis go to become friends? Will they settle their differences or end up killing each other? And why are so many shifty people carrying pineapples around town?

← Ideas of Dreams and Mist
An Equally Ferocious Misery →