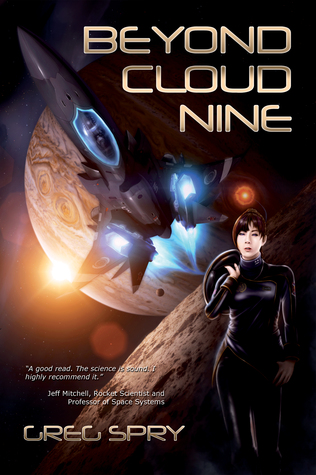 Those who love a good, solid science-fiction story won’t be disappointed with Greg Spry’s Beyond Cloud Nine. Spry maps out a futuristic Earth where humans have expanded their reach and colonized other planets. Our protagonist is Brooke Davis, a young fighter pilot who is the best of her generation. A child born from a Japanese mother and an American father, Brooke has faced discrimination her entire life. Add to the fact that she suffers from a disorder caused by gene therapy before her birth and Brooke screams protagonist. It’s almost as if she knows she’s the star of the novel but what Brooke has to overcome before she can confidently say she has saved the day is both tragic and exhausting. Expending all of her faculties to uncover a surprise conspiracy while reconnecting with her estranged twin sister and niece, Brooke powers forward in this exciting tale where science meets fiction.

Despite first appearances, Brooke is not a strong female lead. She’s battered, bordering on completely broken in both body and soul. Never forgiving herself for the hand she played in her father’s death our protagonist runs away from the things that she can’t handle. This includes her twin sister, who she left behind on Earth six years before the book begins to pursue her profession as a pilot for the United Nations. While she is good at what she does, it is not without a cost. We discover quite early on that Brooke is addicted to illegally enhancing her body with a drug referred to as “Sparks”. It is only after breaking a colleague’s nose Brooke returns to her sister and attempts at reconciliation.

There are many ways a science-fiction tale can go wrong. Over exaggerated feats of science and unrealistic explanations of technology have doomed many a series. Beyond Cloud Nine does not suffer from either of these faults no doubt in part to Spry’s real life experience with engineering and space systems. His control over the craft of story-telling uses these skills and experiences to explain what is happening in an amateur-friendly fashion. No over the top jargon or complicated explanations to detract from the story at hand.

During Brooke’s journey from almost-washed up pilot to practical savior of the planet readers will watch her grow and develop into something that resembles a human being, complete with feelings and emotions. In the beginning Brooke is too broken to connect properly with those around her. Even when she first reconnects with her sister after a six-year absence she has troubles interacting on a human level. She’s angry, confused and as lost as a teenager trying to figure out what makes them, them.

Readers will surely enjoy this first installment to the Beyond saga penned by Greg Spry. Brooke overcomes some of her faults while retaining others and that allows readers to feel more connected to her; because she’s real. Beyond Cloud Nine delivers with action, compelling character development and realistic explanations for technology that doesn’t quite exist yet in our present time. Or does it?