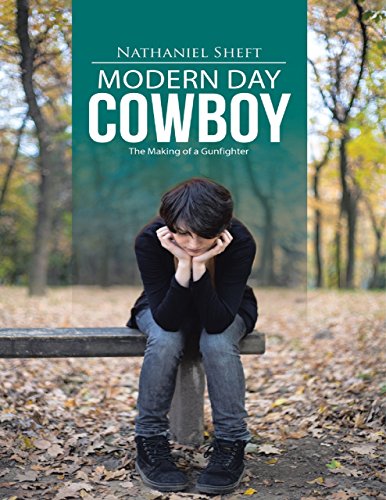 Modern Day Cowboy follows the story of Mattie, a young girl who’s training to become a gunfighter. What made you write a story about gun fighting? Was there anything you pulled from your life experiences?

The things I write usually come from my over active imagination. None of these things I wrote in Modern Day Cowboy came from personal experience. Truthfully, I’m not even much of a gun person even though I do think people have a right to bear arms, to a certain extent. I just think we are living in a moment where we rehash things instead of using our creativity to create new things.

I tried to read up on what I could and just did the best I could. I started writing Modern Day Cowboy in 2004 after a break-up with a girlfriend. Actually I was writing The Beast Within at the time when this story just came in my head. So, I decided to do both. At this time I didn’t have a computer, so I wrote everything by hand. Pages and pages of notes. About three years later I got my first computer, my own personal Univac. I tried paying somebody to type it, that was a disaster. So I just eventually made myself learn a few keys, then I discovered Dragon software and Open Office. Yeah, that took awhile. Now many rejections later, here I am.

David and Mattie are complex and interesting characters. What were some of the trials that you felt were important to highlight the characters development?

My writing does shifts, elegant or plain. Sometimes my heart is there, sometimes my head. The character of David allows me an open love letter. That’s my void, my desire, things never had but wished for. I have a lot of things written along these lines, but I’m not quite sure people like that sort of stuff these days. So yes, bits and pieces of David are me. Real life people popped in my mind when I wrote this story. Ellen Page for Mattie. Christina Ricci for Carolyn, Morgan Freeman for Hustis, Catherine Keener for Madeline, Clint Eastwood for Rusty and Dakota Fanning for Addison Bell. This made the process easier since I’ve always had a vivid imagination. This story played in my head like a movie, I didn’t sit down to write out cue cards, or plot points. I just go with what I feel is right and revise when needed.

What is the next book that you’re writing and when will that be available? Will there be a second part to Modern Day Cowboy?

Part two is already written, has been for a while. It’s just not edited, about the same length as the first and explains what everything was really about. But there are new elements, and a surprise for Carolyn. I’ll be more than happy to answer any other questions you have.

After both opponents turn over three shot glasses of Hennessy, the Lincoln girl challenges Mattie to a game of Russian roulette. A mistake, at this moment Mattie is maniacal, she clicks her trigger two times in a row.

Modern Day Cowboy is about the angry romance of a young girl not long out of high school. The experience of first love in the internet age of availability. Trying to figure out the rest of her life is hard enough, now tragedy strikes. Someone set up a row of domino’s and by accident Mattie touched the first one. Now all she can do is watch. Some kind of declaration of war from some unseen enemy. The ensuing conflicts redistributes her morality as the paradigm between right and wrong shifts. Secrets from her mothers past may hold the key.