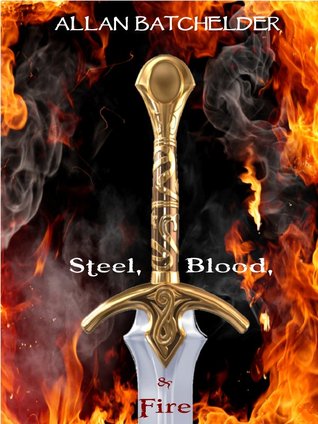 Dark, gritty, and altogether brutal, Steel, Blood and Fire is an archetypal dark fantasy novel. In the first chapter, one of the main character’s hands and feet are amputated, and the story continues in similar fashion from there onward. The setting is fantasy grounded in muddy reality, although there is a vein of consequential magic that adds a little sorcery to this otherwise swords-based world. If you’re familiar with Game of Thrones then you’re familiar with Allen Betchelder’s style; multiple character perspectives, inter-weaved story lines, and a healthy dose of murder. It’s a fantastic modern-style medieval fantasy, and a definite read for any fan of the genre.

When I began Steel, Blood and Fire, my first thought was, “Wow, this is a lot like Game of Thrones.” Then I began to think, “Or is it more of a Witcher book?” As I continued through the novel, I began to decide it was a blend of both. By the end, I thought that perhaps it was its own thing.

The book isn’t afraid to touch on the brutal. In fact, it seems to revel in it. Blood flows freely; rape is the buzzword of the day. It’s a mature novel for sure although it doesn’t quite cross the line, but regularly toes it. A lesser author would have toppled their novel over into prurient pulp.

The writing is well-executed, with the author’s own voice clearly shining through. There is one trap that Allen Betchelder tends to fall into, and that’s the ‘fear of said’. Every other sentence seems to find a new synonym – characters question, murmur, mutter, bellow, but words are never just ‘said’. It’s awkward to read, and tends to draw you out of conversations that should flow naturally.

In any perspective-hopping plot, characters are one of the most important factors. Fortunately, Steel, Blood and Fire features a strong and memorable, if slightly generic, cast. They come off as slightly one-dimensional, particularly towards the start of the novel, and the inclusion of a comedy group of village bumpkins – who of course meet with terrible fates – struck me as being an attempt at generating some frisson with the grim background. Other than those minor niggles, the diversity and depth of the cast begins to truly shine through around the midway point; from here onward they become much more than the sum of their parts.

Despite my above criticisms, I really did enjoy the story, and it quickly became engaging only a few pages in. If you’re a fan of the genre, particularly Game of Thrones-esque fantasy, you’ll certainly enjoy Betchelder’s offering.