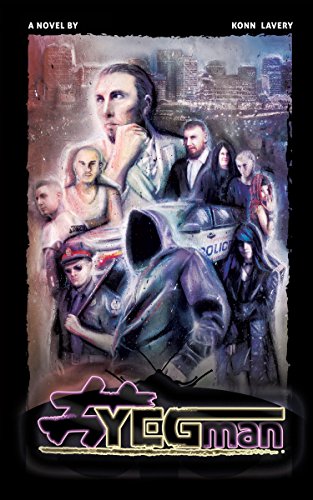 YEGman by Konn Lavery is a dark thrilling romp through the back allies and underworld of Edmonton, Canada. Michael Bradford, our hero, is a vigilante, who struggles with violence. His issues aren’t going to get better as he investigates the most notorious gang in Edmonton, the Crystal moths. His methods are caught on film and uploaded online to become viral sensations and are labeled with the hashtag, YEGman. The videos fascinate a rebellious journalist, who wishes to cover the story of this mysterious hero.

This novel is an unexpectedly gritty trip through the Canadian crime scene that I don’t find too often in literature. Most of what comes to mind may be cozy mysteries, not ultra-violent vigilantes dealing with criminals. The novel takes a fun turn with the involvement of the student, Lola and how she gives a better and deeper inside look of the gang culture. In some ways, the trope is rather familiar with an attractive journalist in training along with the brooding vigilante in Bradford. It kind of brings to mind a mix of Batman, Spiderman, and Lois Lane. It’s an affirmation of Lavery’s skill to synthesize all of this together to make a novel that engages the reader and doesn’t let up until the end.

Lavery’s style leans on description, which helps to develop the world of this noir thriller, but I felt that the characters sometimes overly explain things. The prose is decent and kept me involved, but the pacing sometimes slows because of the over explanation which left me often wandering from the story. With an action packed story like this, putting the brakes on to go into detailed explanations lowers the tension on an otherwise exciting story.

This novel is plenty gritty, with a dark narrative and the definite feel that danger lurks within every shadow. With a consistently murky tone and treacherous atmosphere to the novel I was able to sink my teeth into the dark underworld set in an alternative Edmonton. For Canadian readers and noir thriller aficionados alike this novel would be a fun read, even people who enjoy a little bit of mystery and can tolerate the violence, this is recommended reading. Overall, an exciting addition to Lavery’s body of work.