← What Anyone Can Do – Book Trailer
The Matriarch Matrix → 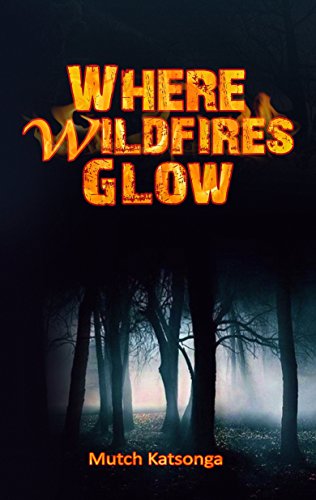 Discovering a young boy living in the wilderness would be an unexpected shock for anyone, just as it was for a local state trooper, but no one could have predicted the chilling truth that finding the boy would unearth. It’s this unexpected fact that evil thrives in, often striking in situations where we least expect it.

Mutch Katsonga’s latest book, Where Wildfires Glow, unexpectedly made me challenge my own personal view of the good and evil in the world. The introduction poses a series of deep, philosophical questions for the reader that I often found myself reflecting upon as I read the novel. I was skeptical at first as to whether the story would furnish me with the answers to these questions, particularly, considering that I deemed the start of the book to be slow. However, what I did not realize is that Katsonga was just setting up what was to come through his in depth descriptions of the landscape and natural world, and I found myself reliving these romantic descriptions during the climatic end. The child’s two contrasting encounters with the harsh wilderness are beautiful metaphors for the detrimental and damaging effects that abuse can have on a person.

The way in which Katsonga has narrated the story and not given the boy a identity means that as a reader, I struggled to form a connection with the character, regardless of the overwhelming compassion I felt. Whilst I thought that this made the story feel a bit empty at the beginning, I realised that this perfectly reflects the sense of detachment that evil inflicts on its’ victims. The writing is a bit unpolished with slight typos and grammatical errors which probably could have been avoided with thorough proofreading. Unfortunately the obvious mistakes often pulled my attention from the story, which was a shame at crucial moments, but this was definitely not to the point where I lost complete focus or the book was no longer enjoyable. Additionally, as the protagonist of the book is a young child, I felt that some of the words the used are too mature which I felt detracted from the authenticity.

However, the poignant moral behind the story is that evil can make us lose sight of who we are and taints our view of right and wrong. When we allow it into our lives, it will inevitably envelop us; our vision becomes tunnelled and focuses only on the negative. The cycle of abuse is unrelenting and will just keep going, manifesting in each generation, until something breaks it. Katsonga teaches us that evil cannot be fought with evil, and it is only the power of light and the power of good that can break the cycle. I believe that this book will challenge that way that every reader views negativity and the power that it can have on an individual and those around them. It made me more conscious about how my actions can affect others, and has encouraged me to make sure that I always give off a positive energy.

← What Anyone Can Do – Book Trailer
The Matriarch Matrix →