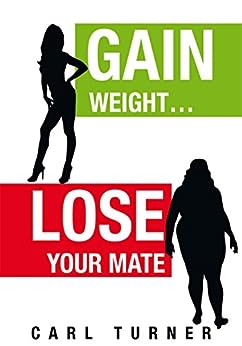 Life happens. We all know this and generally don’t have to be reminded of this truth. Along with the rigors of work, family, and relationships come changes in metabolism and eating habits. Women seem to bear the brunt of these changes with weight gain following the transition into marriage and motherhood. Make no mistake about it, women are well aware of the changes their bodies undergo, and they are hyper aware of the impact their weight gain has on relationships and their overall health. Whether women work to lose weight or not, they don’t need reminding that their bodies are changing in ways they may not necessarily like.

Carl Turner’s Gain Weight…Lose Your Mate examines the tendency of women to gain weight and focus less on maintaining the size they were upon entering the relationship with their mate or spouse. Turner spends a significant amount of time examining men’s awe regarding their girlfriends’ and wives’ seeming unwillingness to lose weight following childbirth. Though I understand some of the reasoning Turner sets forth, he focuses rather relentlessly on the desire men have to see their wives lose the baby weight.

Another aspect of Turner’s writing lies in the fact that he relates men’s feelings to the physical appearance of their wives and girlfriends. According to the author, there is a certain level of happiness most men feel as a direct result of their wives’ physical appearance, and that level of happiness is negatively impacted by their choices not to pursue exercise and healthier eating habits.

Peppered throughout Turner’s book are scenarios and examples of couples coping with the woman’s weight gain. Turner presents these situations in order to better illustrate his point but succeeds only in making men look more and self-centered. In once such scenario, Turner introduces a brief scene in which one man tells his wife that he will leave his wife alone with their children if she keeps her weight as is and doesn’t find a way to drop the extra weight she gained after having the two children. Sharing this story would have been effective had Turner used it to explain the selfishness behind the man’s comments. However, Turner goes on to explain that men don’t care what their mates eat as long as their weight/appearance is not negatively affected in their opinions.

Turner does include research-based measures and manages to warn readers of the consequences of obesity and the ensuing health conditions which result from overeating and failing to exercise regularly.

Turner’s writing style is straightforward and polished. Overall, I am mortified by the tone taken by the author and feel the writing lacks solid advice to rectify an issue rather than pointing out that there is a problem. His point of view is well crafted and easily understood.