Whatever He Wants: The Pleasures and Perils of Power 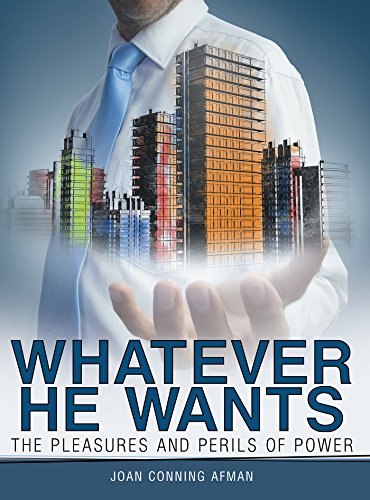 Whatever He Wants: The Pleasures and Perils of Power By Joan Conning Afman is a contemporary story set in West Palm Beach, Florida. The books starts with Mel Martinelli and Sam Abrams, two unethical businessmen, looking for an up-and-coming politician to groom for state senate. They want a man they can control, who will serve their own interests. They decide that David Shepherd, a young, handsome lawyer is the ideal candidate. David insists that he will not be a party to anything illegal, and with their insincere assurance that they would never ask him to do anything like that, he agrees to their proposal to fund his campaign. Mel goes so far in his machinations as to encourage a romantic relationship between his daughter, Michelle, and David, which eventually leads to marriage. Will David’s ambitions cause him to act contrary to his beliefs? Or will he stand firm against others’ attempts to compromise his determination to do what is right?

Michelle Martinelli is a controversial character that had me shaking my head at the beginning of the story. She was entitled and snobbish, with no ambition and was supported by her rich father. She was a character perfectly created to be hated. She was drawn to a man based on his looks alone, without any thought for what kind of person he was. What I really enjoy about the characters in this book is how they evolve over time. Michelle starts to develop some redeeming qualities as time passes, although still unlikable, I was impressed with how well developed here character was.

While the books started with me loathing Michelle, I had the opposite feeling of David Shepherd. He seemed to be an ethical man who refused to comprise his principles for others. But as the story progressed, he abandons his scruples and becomes corrupted by power. This slow decline into the very worst sort of politician reveals how someone can change, and the contrast is stark and revealing–accepting bribes, having an adulterous affair, fathering a child with a woman who was not his wife, contemplating and condoning murder to further his own ends.

I enjoyed the author’s writing style, it flowed easily and was frank and to the point with only a few editing issues. The story was well paced but there were a few sections where I would have enjoyed a little bit more information before the story moved on. The story follows the development of the characters over the course of more than twenty years so there were points where there are large time jumps leaving me with a few questions in an otherwise well written story.

This is a fascinating story that examines how people change over time. This is a character driven story that I highly recommend to anyone who likes stories that put humanity to the test.