← Voyages Volume I : A Collection of Poetry
Scream Aim Fire →

Five Fathoms Beneath follows Ambrose as he must deal with the emotional and untimely death of his father. What was the inspiration for the setup to this intriguing novel?

Without giving away too much personal information, I have experience with both cancer and bipolar disorder. That said, an author who chooses to write about mental illness is taking on a great responsibility–how we depict illnesses in fiction impact how people view those illnesses in reality. That led me to do research, and early in that process, I came across an article about the high incidence rate of suicide in the medical profession. There’s relatively little written on the topic, which isn’t surprising when you consider a mental illness diagnosis can adversely impact a doctor’s career. As someone outside the profession, however, I could write freely about the topic, without anyone assuming I was writing about myself or a colleague. And so I came up with the idea of writing a story about a family of medical doctors who deal across the generations with suicide and mental illness, especially depression.

This book deals with mental illness is a passionate and understanding way. Why was this an important topic for you to explore?

At the beginning of, “The Fault in Our Stars,” in his Author’s Note, John Green writes that it’s a fundamental assumption of our species that made-up stories matter. I think Green is absolutely correct because fiction informs how we view the world, and consequently, as writers, we not only have the power to entertain, but we also have the power to explore deeper themes and potentially change the world in a positive way.

We’re almost two decades into the supposedly “progressive” and “woke” twenty-first century, and mental illness is still being used as a pejorative or as a way to fear monger. And that’s even by people who frankly should know better. The stigma attached to mental illness dissuades people from seeking help. Not seeking help costs lives. And that’s something which impacts us all — whether it’s on the personal level when someone in our family is suffering, or on the societal level when we lose our best and brightest. We all should care about mental health because mental health is something which impacts us all.

Ambrose is a unique character that I liked watching change over time. What were some ideas you wanted to capture while creating his character?

I didn’t intend for Ambrose to speak for everyone with depression because depression exists on a spectrum and besides, everyone’s experience is unique and different. That said, with Ambrose’s character, the reader gets some insight into how a depressed person thinks. For example, when he snaps at his patients, it’s not because he’s an inherently bad person, it’s because he’s overwhelmed, exhausted, and struggling with his mental health. Ambrose also accurately depicts why it is difficult for members of certain professions to get help, and the serious impact and far-reaching effects an illness like depression can have on a person’s marriage, family, and life.

Beyond that, much of the novel deals with Ambrose trying to figure out where he fits in the universe and in the grand scheme of life. Ambrose wants to do good and be a hero, and he struggles with who he is and who he wants to be. In the end, he finds his way of being a hero in a way which plays to his own strengths and in a way which is his uniquely his own.

I’m currently in the process of brainstorming a sort of prequel to Five Fathoms Beneath, based around Ambrose’s father. 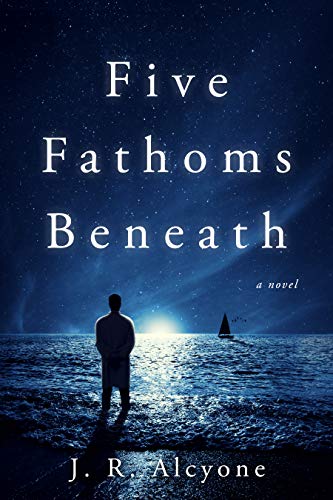 If Ambrose Serafeim’s life is not quite perfect, then it’s very good–he lives in picturesque Western Australia, he has a lovely fiancée, and he is well on his way to fulfilling his childhood dream of becoming a physician. Brose owes no small part of his station in life to his famous father, Alec, a gentle and idealistic pediatric heart surgeon who lives by a simple moral code–do good and be good. Brose believes in his father and that code the way he believes in absolutes like oxygen or gravity. But when Alec shatters Brose’s perfect world by acting in a way Brose can neither forgive nor understand, Brose is left foundering amidst an existential crisis and clinical depression, unsure not only who he is, but who his father was.

That is until a catastrophic injury in a running race changes everything.

The road from that catastrophic injury leads Brose to the same heart-stopping precipice on which Alec once stood. Facing the possible end of his marriage and having seemingly lost his career, will Brose repeat his father’s terrible mistake, or will Brose blaze a new path forward, one where he finally realizes his potential to help others?

A twist on Loren Eiseley’s famous essay, “The Star Thrower,” Five Fathoms Beneath blends a realistic medical backdrop with a dash of magical realism to tell the heartbreaking yet ultimately life-affirming tale of a man’s quest to find his life’s meaning.

← Voyages Volume I : A Collection of Poetry
Scream Aim Fire →