← The Contest and Other Stories
Consuming Love: The Joy of Sharing Meals → 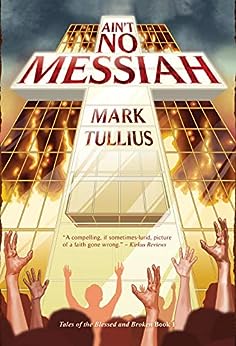 Ain’t No Messiah by Mark Tullius is a dark and intriguing novel about the life of Joshua Campbell. Set in the United States, it’s a tale of his life, from birth to adulthood. Significant family members such as his mother, father and brother walk some of his journey with him as well as childhood friends that reappear in early adulthood. Estranged family members are in his mind all the while and readers meet them briefly as he tries to connect with them.

Having almost died at birth, Joshua’s father labelled him the messiah. His father continues to use this label throughout Joshua’s unusual life; citing near death experiences as miracles. His father publishes books about him and fashions a new church and business on the miracles of the messiah. Despite calling him the messiah, he  verbally and emotionally abuses and neglects him on a regular basis. Joshua consistently refuses to believe he is the messiah and begins to rebel against his father’s rules. Eventually, at 17 he decides to run away, and experiences the world in a new light, but finds he still can’t shake the title of Messiah.

As the story progresses it is unclear whether he seeks out trouble, or trouble seeks him out, and this grey area is what kept me engaged throughout the story. Joshua is dragged into a world of sex and drugs, but he still has to run from his label as the messiah and his tyrannical father. As Joshua is pulled deeper into this world it becomes unclear who he can trust and things turn into a life and death situation. This reminded me of how Stephen King sets up his stories to deliver poignant ideas through simple prose.

Ain’t No Messiah kept me engrossed until the very end. As I read I kept questioning whether Joshua would break free forever from his father, or if he would be tempted by the life of fame and comparative comfort? At times I questioned his life choices and whether he could trust the people he aligned with. The main characters were well developed and believable. However, I felt there were far too many minor characters in the story that kept entering and disappearing. At times it became difficult to keep track of who was who. This detracted from the overall story as I had to pause and try to remember who the character was and why they were important to the story. The transition between flashbacks to past events and present day were clear at the start of the book, however near the end they became less clear which also distracted from the overall continuity. Overall this is an interesting and well written book that delivers a thought provoking message by putting a fascinating character in evocative situations that beg one to reflect on the choices we all make in life.

← The Contest and Other Stories
Consuming Love: The Joy of Sharing Meals →