← Can Any Changes Be Called Revolution
The Moral Dimensions of Humanity →

It Was A Twisted Path

I wanted to explore the concept of what if Christianity never happened, and what events may have prevented the birth of Christ. What if the Greek gods were to learn they would be superseded by a single divinity? How would they react and what would they do? Are their powers omnipotent or are they impeded by restrictions and what are they? This is what I wanted to delve into in the trilogy, and offer an alternative. If Christ wasn’t born, then which deity would prevail?

The main theme is self-enlightenment, growing and learning from experiences whatever the challenges or situation. As each book is written, it is my hope Evan and his companions continue to grow and become more self-aware and enlightened. Destiny is another theme I wanted to explore and develop further in each book. Was Evan destined to be the hero, go back to his past and prevent the rise and birth of Christ? Or does his destiny and the world’s change once he makes a decision or when he acts? Is he controlled by forces that he cannot see or feel? In essence, I wanted to explore the idea of whether destiny shapes who we are, how we think and what we do. Family was another theme I wanted to include, Evan is very close with his parents and deceased sister, and mentions in book one various familial experiences. In book two, his recollections of his family are still there, however his surrogate family, Dexion and Phameas, and half-brother, Homer, who he discovers at the end of book one, become pivotal in the story. He and Homer are Zeus’ offspring, and the family ties are even stronger with the High Priestess, who is his sister. Darkness and light are another theme, which is hinted at in book one, grows in book two, something that I will explore more in book three. The darkness is within Evan, his transformation evident when he gets angry and his eyes turn black, a characteristic he shares with the High Priestess, though she tends to use her particular abilities when they are in trouble.

How did the idea of the gods from Greek mythology fighting monotheism develop into a story for you?

It was a twisted path, much like the journey the characters go through in book two, the original concept for the story looked very different to the books I’ve written. It was meant to be about how the Atlanteans re-emerge from the destruction of their home and re-discover the world in which they once inhabited. It didn’t have enough for me to explore or write, so I re-read Homer’s Iliad and The Odyssey. They are my go-to books for inspiration as is Joseph Campbell’s books. Then I had an epiphany, if the gods created such havoc through one war and for one individual who tried to return home, what would they do if they discovered that their existence, their omnipotence, their control over humans was threatened? I didn’t think they’d like it at all! And that is how my idea for the story evolved.

I think you did a fantastic job of building great characters in this story. What is your writing process like in developing your characters?

Thank you very much for the compliment! I tried very hard to make sure each character had his/her own personality and I wanted each to stand out, even if their role was a minor one.

I have in mind what they look like, how they sound, how they walk, the colour of their skin and hair, how tall they are or short. I then write their details out on a proforma, similar to the old index cards, a character biography. I have three separate documents: one for master characters, major and minor. On each of these ‘cards’ I have their names and age; their pertinent biographies including occupation (if they have one); physical features; distinctive language; goals/motivation; fatal flaws and saving grace. These help me keep the characters consistent and ‘flesh out’ who they really are. I got this strategy from reading: The Writer’s little helper by James V. Smith Jr.

When I am writing, I visualise the characters, how they interact, what mood they are in, their body language, speech inflections and little quirks they have. For example, Phameas, who likes to keep his hair and beard curled, a Phoenician style and sign of a man’s virtue, is upset when Evan has radical haircuts and shaves. However, the characters don’t always allow me to write how I want the story to go, they interfere, a lot. I guess that’s only fair, as it is their story I am writing.

This is book two in the Servant of the Gods series. Where will book three take readers?

In Book three, Evan and his companions find a way to leave the Isle of Hephaistos, and sail to Crete. They are a bit concerned, as prior experience has seen them shipwrecked and the Argo badly damaged. They island hop, that is Jason’s preference to ensure they don’t run into the Cyclops again. It is at one of the islands that Evan encounters the Dark Master, and have a conversation. When they arrive on Crete, they discover ancestors of the island who had escaped the deluge. One of the islanders shows them the way into King Minos’ labyrinth, where Evan will face the Minotaur. What happens in between, who knows? 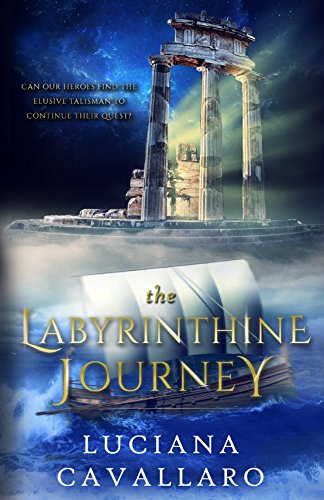 Follow Evan as he continues his odyssey as Servant of the Gods in The Labyrinthine Journey. The quest to locate the sacred object adds pressure to the uneasy alliance between Evan and the Atlanteans. His inability to accept the world he’s in, and his constant battle with Zeus, both threaten to derail the expedition and his life.

Traversing the mountainous terrain of the Peloponnese and Corinthian Gulf to the centre of the spiritual world, Evan meets with Pythia, Oracle of Delphi. Her cryptic prophecy reveals much more than he expected; something that changes his concept of the ancient world and his former way of life.

Will Evan and his friends succeed in their quest to find the relics and stop the advent of Christianity?

← Can Any Changes Be Called Revolution
The Moral Dimensions of Humanity →