Greater Things Than Thou 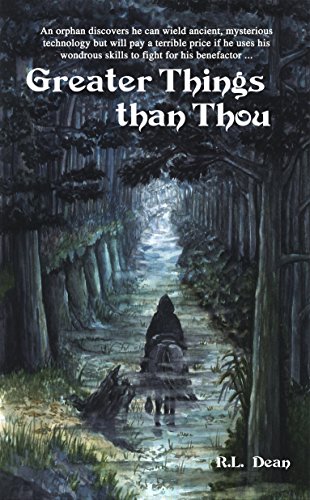 His first memories were of his town burning to the ground. He doesn’t remember his parents or where he lived, only flames, death, and fear. Baler, a mentally unstable ‘king’ to his community of bandits, takes him to raise as his own son. In this bandit camp he is known only as boy. On a raid several years later Galin and Garret save him and give him a real home, hone his skills and give him a name, Patrin. A mix of medieval style living and culture with an alien technology thrown in to add a unique twist to the tale of an exiled king recovering his thrown.

Greater Things than Thou by R. L. Dean is well written with each chapter starting out with a sort of monologue / overview from his perspective as an old man. On the surface the setting and time period is that of medieval style though not from standard Europe. There are clear class systems from farmers to royalty. Most technology, for the non-Gifted, is what you would find in Medieval times, horses, carts and crossbows. The world that R. L. Dean has created involves the addition of an alien technology. This technology allows them to heal at remarkable levels and see things within their mind that no one else can see. It increases their intelligence and augments their bodies based on their individual packages and their jobs. Patrin is trying to destroy all remaining tech to prevent further use of it by anyone. The remainder of the story is his life from a small boy to young adult. I really liked the detail that went into Patrin’s thoughts and how he processed everything. How he adapted to each new situation life throws at him, and the technology that is implanted into his body. He is genuinely a character that wants to see the good and morality in all people and do the right thing. He eludes to his oath to Galin as being the cause of his moral missteps and failings later in life. The reader can get a real feel for the people he develops emotions for, Garret, Serin, Xadik and especially Lena. His relationship with Lena is one of young love, the awkwardness of first loves, and highlights the complications of his life thanks to his oath of loyalty to Galin.

As the first book in the series, Blood of the Prince, it is a great introduction to the main characters and how Patrin gets his start in life. Based on the monologues at the beginning of the chapters, I can tell the rest of this series is going to be full of adventures, plot twists, and action. It is a story about loyalty even to a fault, finding your way, and redemption of character. This is going to be an exciting series to follow.