← Phantom’s Mask
Songs in the Night: How God Transforms Our Pain to Praise → 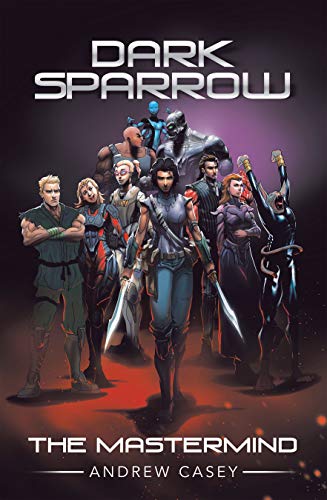 Nankin City is thrown into chaos when a magical cyborg attacks a country club. As the city’s forces attempt to nab the culprit, emissaries from Albac, a magical planet arrive to join the investigation. They believe the perpetrator comes from Albac and want to help Nankin City find him. To do this, they recruit a few of Nankin’s residents. Dark Sparrow, a bounty hunter finds herself among those selected to travel to planet Albac and help solve the mystery. But she also has a side job to investigate the case of several missing children. She juggles these two cases while struggling to quell the raging demons from her past. The attempts to unveil the cyborg’s identity reveals a deeper agenda that will change the lives of all the investigators forever. Who are those behind this troubling scheme and what do they want?

Andrew Casey’s Dark Sparrow is a delightful mashup of science fiction and fantasy. It has all the usual elements of these genres of fiction. Magic, a fascinating but bizarre planet (that’s not earth), superhuman abilities, fantastic beasts, cool weapons and all the works. Casey’s work is detailed, immersive and very stimulating.

Dark Sparrow is packed with man versus man and man versus alien fights that will give action lovers good value for their money. I particularly liked Dark Sparrow. Her skill, defiance and quirkiness showed her to be a kick-ass protagonist you don’t want to mess with. At times I felt there were too many characters in the story early on and it was hard to keep track of each one. Some of the characters took on separate identities on earth and on Albac which added to my confusion. I am able to overlook little snag with the characters and highly recommend this book.

The thrill of fiction lies in its ability to help readers to escape reality while still feeling its strong pull, Casey generously provides this benefit in his book. While giving my imagination something to lap up, he carves his story around many relevant social issues. From divorce to parenting, empathy, cyberbullying, love and LGBTQ themes, Casey touches them all. All this might sound overwhelming but Casey skillfully holds every bit together with engaging dialogues and a strong story line. What’s more, he delivers each theme with a fresh perspective that rings true.

← Phantom’s Mask
Songs in the Night: How God Transforms Our Pain to Praise →