← November 4th: Introduction
As the Daisies Bloom: A Novel → 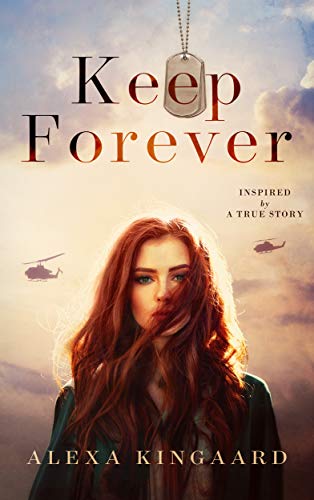 Keep Forever is a book that will sit with you for a long time and bring to light subjects you hadn’t thought of. The book focuses on two men during the Vietnam War. Paul and Sam. Both wounded in the war and sent home; they have to relearn how to be who they are in a society that didn’t believe in the war. While Paul’s scars are internal and Sam’s are in your face, both men realize that moving on from the war isn’t as easy as they thought it would be. The book also focuses on Sam’s sister and the journey she takes from being a young woman to a woman who has grown and matured while trying to help her family.

As a military veteran’s wife, this hit home, and I cried at some parts, wondering what would have happened if my spouse had been alive during the Vietnam War. I could relate to the characters personally as my husband has PTSD and found myself crying for Sam, Paul, and Sam’s sister Elizabeth when reading everything they had to endure. It seemed like they faced so much adversity and struggle, but life is like that, and it reflected what we all go through.

I liked Sam’s character but felt he didn’t get enough time to fully develop. We can assume he lived a peaceful life and had children who had children, but we never hear what happens to him. We stop hearing about Sam about halfway through, and I did find myself wanting to know more about his life and journey. The only other small issue I had was with the ending which didn’t bring the conclusion I wanted… but I suppose this is a good reflection of life in a way. I could guess the ending before it happened, and had braced myself for it, (though I still burst into tears having felt a connection to the characters and their story), but the last two pages were not a good ending for me.

I do think this book is beautifully written and sheds light on a crucial issue and issues that affect the military. I honestly respect anyone who has ever put on a uniform and feel that the author did the book justice, by how it was written. I just wanted a different ending for the characters, but this was because I genuinely fell in love with them.

← November 4th: Introduction
As the Daisies Bloom: A Novel →