← Mimi’s Adventure
Who Okayed This?! The Riveting Life of Grant Davis →

Veterans of the Psychic Wars 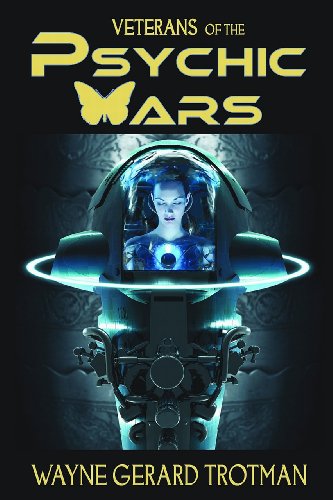 Roman and his young wife are on their way to beginning a wonderful life together. They will soon be parents, and the biggest problem in their lives is deciding on a name for their unborn child. Roman’s midnight trip to satisfy his wife’s cravings should have been easy–in and out and back home. When Roman is approached by five strange men in the darkness, his errand turns into something much more sinister. Roman is prepared for muggers, but this has a much different feel. When one of the ominous figures addresses Roman as “Master Armon,” he is as confused as he is frightened. Nothing of his simple life will ever be the same.

Veterans of the Psychic Wars, by Wayne Gerard Trotman, is the action-packed science fiction thriller surrounding main character, Roman. Roman is not who he has been led to believe he is. As knowledgeable as he is in martial arts, he cannot possibly be prepared enough to tackle the otherworldly powers he meets when he is attacked and kidnapped on a late-night errand.

If I pick up a book and don’t feel an immediate connection to a character, I am done. Trotman gives readers no time to have to make that decision. His main character’s first moments are filled with trepidation and drama. There is an air of mystery that grabs readers and pulls them into the story. The malevolent presence that descends upon Roman and the sense of foreboding is overwhelming in a wonderfully inviting way.

Roman’s simple life as a teacher makes this story even more engaging. He is one of us–an average guy with an average life. The fact that he is the basis for the intense action and is the center of such an elaborate science fiction plot makes Trotman’s work all the more appealing. Roman is a fantastic character. He is relatable and has a personality readers will want to root for.

Science fiction stories can get complicated and aren’t for everyone. Trotman, however, has navigated the science fiction waters with ease. His writing gives readers the perfect blend of character development, gripping backstories, and technical content. Readers won’t find themselves bogged down in technical jargon. Exchanges between characters are genuine and actually peppered with humorous moments. Trotman has hit upon a riveting mixture of drama, science fiction, and lighthearted banter.

← Mimi’s Adventure
Who Okayed This?! The Riveting Life of Grant Davis →