← A President in Waiting
Limerick Comics →

The Chronicles of AzzaNation: Dawn of a New Age 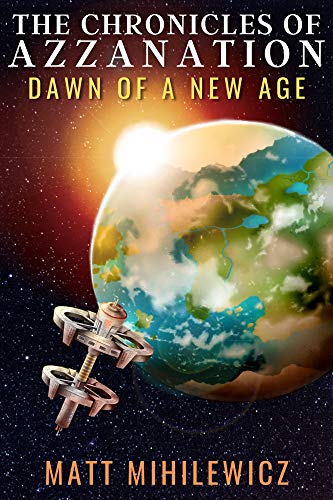 The Chronicles of AzzaNation: Dawn of a New Age by Matt Mihilewicz is a mesmerizing and expansive science fiction fantasy story following an unlikely battle between the tyrannical leader of AzzaNation and a young man, Leo Exe. The Brotherhood of Light, a powerful resistance group recruits Leo to attack the King and his Royal Army for the terror they have created. Alongside is Diandra, a woman with strange powers that allows her to control the energy surrounding her. Leo and his unlikely friends come together to take down the evil leader and bring back the light to AzzaNation.

Leo Exe is a compelling and likable protagonist- he’s a bit Aladdin-esque. He’s poor, struggling, and with an odd but strong moral compass. He is the definition of a reluctant, unlikely hero as he gathers his limited resources to fight against the despot. Diandra is also a strong, compassionate, and rebellious character. She uses her powers and training in capturing natural energies to help Leo out of difficult situations. I would have loved to read this story from her point-of-view– she has the coolest powers and is unintimidated in the face of danger.

The novel opens with an intricate map of AzzaNation that I would frequently flip back to while reading about the various places and interesting terrains. I’m always a fan of maps and illustrations of any kind in fantasy books– they provide a depth to world-building that wouldn’t be there otherwise. The author also provides a sort of preamble in the beginning, giving a short history of AzzaNation and setting the stage for its characters later on.

This is not by any means a light read but it is extremely engaging. The author dwells on all the characters and sceneries, creating vivid and realistic visions even out of simple meditation scenes. The pace is slow but it makes the build-up even more intense. There are a lot of side plots happening and many hoops that Leo has to jump through to get to achieve his final goal. This is not a cut-to-the-chase action thriller. This was a very rewarding read because of the slow-burn nature. I am invested in seeing the fate of AzzaNation, the Brotherhood, and of course, Leo. I would recommend this book to anyone interested in escaping to a different and a much more fantastical world.

← A President in Waiting
Limerick Comics →