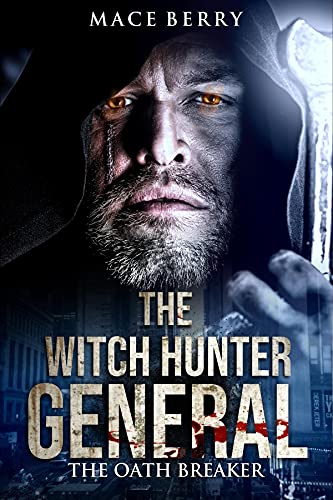 The Witch Hunter General: The Oath Breaker, by Mace Berry, is about the two-thousand-year-old Inquisitor General Victor Cain. He’s a witch hunter who has been framed for murder by Gabriel/Mortifer. General Cain is confronted with Aka Manah, an enemy from his past, and learns who his friends really are. Mace Berry has written a great book that sucked me into the story. I truly enjoyed the read and the characters. I cared about what was going to happen to Victor Cain. Berry has created a unique and creative world with lots of depth to explore.

In the prologue, Aka Manah and Gabriel are introduced, but neither one of them were named right away. This makes the story feel lived in and like we are stepping into the story as it is already moving along, much like the beginning of A Game of Thrones where we enter a world with an established history and we are only catching up.

This is followed by getting into the first chapter and Victor knows that Aka Manah still lives, but I didn’t see any information as to why Victor would know this. This speaks to how invested I was with this intricate story. When the members of the High Council are introduced in chapter seven, it is so that they can choose a new Grand Inquisitor. I’m left wondering why they would be involved with this when it is explained a bit later that the High Council and the Inquisition are separate branches of the government. There are many layers to this novel that I sifted through because I was enthralled with the characters and the detailed nature of the story.

While I enjoyed the story I felt that the ending was a little abrupt. I will not give too much away here, as it is definitely worth the read, but it ends with an important change to one of the characters. Readers looking for a dark fantasy series that looks like it can easily run several novels will have plenty to enjoy here.

The Witch Hunter General: The Oath Breaker has excellent characters that I cared about, in a world that feels real (whether it’s a future Earth or a different planet all together), and a story that pulled me along. This is an enthralling fantasy adventure that is a wonderful addition to what is proving to be an epic fantasy saga.