← LADY SILVER
The Return of the NY Villains for Justice → 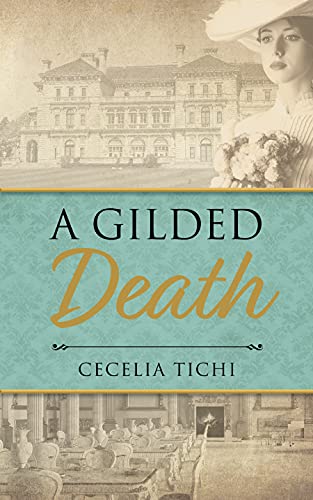 A Gilded Death by Cecelia Tichi is a riveting historical romance novel with a dash of mystery. Set in The Gilded Age in the United States, the reader is plunged into the world of the affluent society of the time. Georgina Brush, Cassandra Forster’s beloved aunt and the heiress to the Brush fortune, dies at an annual ball under odd circumstances. The death of Georgina’s daughter months later under identical circumstances oblige Mr. and Mrs. DeVere, Cassandra’s family by affection, to investigate the murders and prevent a third horrific murder from taking place.

In addition to the historical events depicted in this enthralling whodunit novel, the author uses ample details to show the manners and attitudes of the society at the time, from the fashion and lifestyle of the ladies and gentlemen, to their conversation, and their greed for power and wealth. An eight-plume funeral in the novel proclaiming the great wealth of the deceased epitomizes the avaricious age to which Cecelia Tichi transports readers.

Despite the somewhat serious plot, there is humor, imagery of nature, and irony in the novel. I had to lookup a few terms, historical events, and names of people in history such as Lucrezia Borgia. While I was not familiar with these things overall I certainly appreciated the attention to detail and found that it made the novel feel authentic. Upon looking at the age and events, however, they all began to make sense in the complex plot. This novel is very well characterized, with extravagant clothing, expressions, and mannerisms. The vivid description of elaborate dinner parties and décor is fascinating as well.

While I enjoyed the story, I felt the pace was a bit slow. Although I did feel that the pacing gave time for the development of events and provided a realistic touch to the novel, I felt like some of the conversations between characters seemed redundant. But this does not detract from an otherwise impassioned mystery novel.

A number of aspects of The Gilded Age are examined in the novel, including the exclusion of women from law-making, and the importance of etiquette to the gentlemen and women, the lack of which was met with a scoff. A Gilded Death has an engaging and eventful storyline up until the very end. This is a dramatic story that will appeal to sleuth fans looking for a historical setting to a stirring murder mystery.

← LADY SILVER
The Return of the NY Villains for Justice →