← We Go On A Journey
Joyful and Excruciating →

What Life Throws At Us 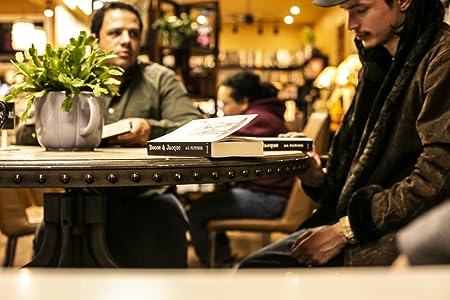 Boone and Jacque: Saddleton Haunting follows three kids who set out on a perilous quest to restore order and peace to their haunted town. What was the inspiration for the setup to your story?

This installment of the series concludes the three characters youth. In which I explore their mental growth. As for inspiration, I thought about my own troubles as a teen and child. Feeling like I had to grow up by myself. My father and mother taught me a lot, but I learned a lot about myself through my own reflection.

Secondly, I wanted to show how a person can learn about themselves throughout life without the influence of peers and parents. Sure we take lessons from all people, strangers or those we know well, but ultimately, it’s what life throws at us that makes us grow.

Boone, Shammy, and Jacque are interesting characters that are fun to follow. What were some driving ideals behind your character’s development?

Boone’s development had to do with untethering himself from the bad memories of his parents. Specifically when they started drinking and becoming neglectful. In addition, he had to learn how to deal with grief even though no one taught him how to do it in a healthy way.

Luckily Shammy was there to help him. However, she had her doubts about him because he wasn’t really showing any emotion until he decided to put his guard down and let the grieving process take over him.

Because she wasn’t meant to be a central character, I kept her development a little more internal. That way the readers can still her growing without overshadowing Boone and Jacque. She was unsure of her sexuality due to feeling distant from Boone. But once he started opening up, she realised it wasn’t her sexuality she wasn’t sure of. It was her trust and bond to Boone.

Jacque was unsure of his sexuality because he, nor the others, was taught about sexuality. He could be seen as gay at first, but he’s actually pansexual.

I’m working on the fourth installment of Boone and Jacque.

The subtitle was originally The Arnaud Murder, but I decided to change the title.

The story focuses on a murder of Jacque’s uncle, but the story runs far deeper than the mystery of a murder.

A strange being looms over Saddleton. Boone, Shammy, and Jacque must restore the balance in power and peace in this haunted town. However, just like in the beginning, there is no telling what will become of them in the end. Not even those in power and the sheep that follow them.

← We Go On A Journey
Joyful and Excruciating →